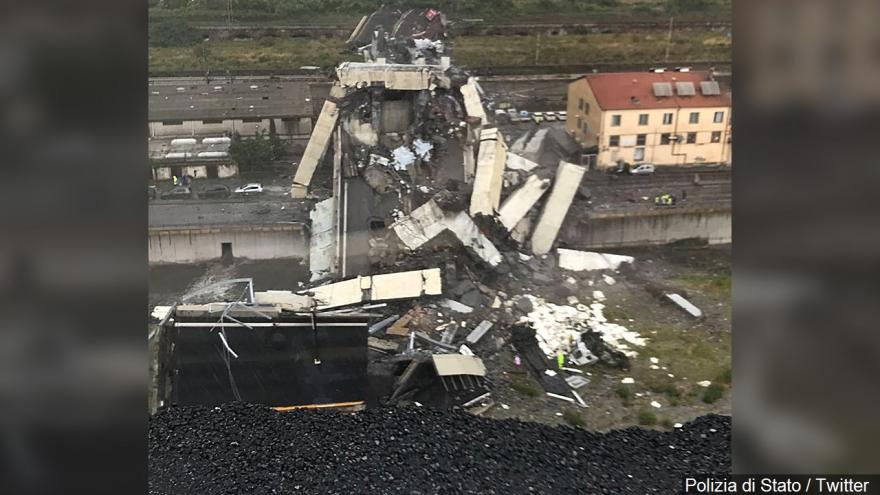 GENOA, Italy (AP) — Italian prosecutors on Wednesday focused their investigation into the Genoa highway bridge collapse on possible design flaws or inadequate maintenance, as the death toll rose to 39 and Italian politicians looked for someone to blame.

Fears mounted that a part of the Morandi Bridge which is still standing could also coming crashing down. That prompted authorities to widen their evacuation to include some 630 people living near the highway bridge that was carved in two by the collapse of its midsection during a violent storm.

On Tuesday, just as many Italians were driving to vacation destinations on the eve of Italy's biggest summer holiday, a huge stretch of the 51-year-old bridge collapsed, sending over 30 cars and three trucks plunging to the ground as far as 45 meters (150 feet) below.

As this crippled major Mediterranean port city of 600,000 reeled from the tragedy, about 1,000 rescue workers on Wednesday kept searching through tons of broken concrete slabs, smashed vehicles and twisted steel from the bridge for any more bodies. At least two more were pulled out.

Some of the tons of debris that rained down from the bridge landed in a dry stream bed, while other wreckage came crashing down perilously close to apartment buildings. At one point, Sky TG24 said, residents were temporarily stopped from even returning to their homes briefly to grab essential documents, medicine or other necessities.

Besides searching through the mountain of debris, emergency workers said it has to be cleared away as soon as possible. Genoa is a flood-prone city, and authorities warned that the piles in the dry riverbed could become a dam in a matter of hours if heavy rains arrive.

Genoa Prosecutor Francesco Cozzi told reporters the investigation into the collapse was focused on human causes, specifically the possibility of inadequate maintenance or a design flaw in the bridge's construction.

"'I don't know if there is responsibility. For sure it was not an accident," he said.

Asked if authorities had been given any warning that the bridge, — a key link between two high-speed highways, one headed toward neighboring France and the other to Milan — could be dangerous, Cozzi indicated that no serious safety concerns before Tuesday had reached his office.

Otherwise "none of us would have driven over that highway 20 times a month as we do," Cozzi said.

Work to upgrade the bridge's safety with a 20 million-euro ($22.7 million) project had already been approved, with public bids for the work to be submitted by September. According to the business daily Il Sole, the improvement work involved two weight-bearing columns that support the bridge — including one that collapsed Tuesday.

The 1967 bridge, considered innovative in its time for its use of concrete around its cables, was long due for an upgrade, especially since the structure was more heavily trafficked than its designers had envisioned.

One expert in such construction, Antonio Brencich at the University of Genoa, had previously called the bridge "a failure of engineering."

Engineering experts, noting that the bridge was 51 years old, said corrosion and decades of wear-and-tear from weather could have been factors in its collapse.

The Italian CNR civil engineering society said structures dating from when the Morandi Bridge was built had surpassed their lifespan. It called for an ambitious comprehensive plan to repair or replace tens of thousands of Italian bridges and viaducts built in the 1950s and 1960s, during the Italian economy's rapid growth as the nation surged back after the damage of World War II.

Mehdi Kashani, an associate professor in structural mechanics at the University of Southampton in Britain,  said pressure from "dynamic loads," such as heavy traffic or strong winds, could have resulted in "fatigue damage" in the bridge's parts.

Italian politicians, for their part, were busy pointing fingers at possible culprits.

Italy's deputy premier, Luigi Di Maio, blamed the bridge collapse on a lack of maintenance by the private company that operates many of the nation's toll highways. Speaking in Genoa, Di Maio said Wednesday that he was looking at revoking highway concessions.

"Instead of investing money for maintenance, they divide the profits. And that is why the bridge falls," Di Maio said of the holding company that controls Autostrade Per Italia.

Di Maio, who leads the anti-business 5-Star Movement party that is part of Italy's coalition government, also took a swipe at the Benetton group, which controls Autostrade SRL through its Atlantia holding company. He blamed previous Italian governments of turning a blind eye to the health of the nation's toll highways because of political contributions.

Transport and Infrastructure Danilo Toninelli, also from the populist 5-Star Movement, threatened in a Facebook post that the state, if necessary, would take direct control of the highway contractor responsible for the bridge if it couldn't properly care for it.

State radio reported Wednesday that some 5-Star lawmakers in 2013 had questioned the wisdom of an ambitious, expensive infrastructure highway overhaul program as possibly wasteful, but that a post about that on the Movement's site was removed Tuesday after the bridge's collapse.

Just hours after the collapse, Salvini also was trying to shift the blame away from Italy's new populist government, vowing not to let European Union spending strictures on Italy, which is laden with public debt, stop any effort to make the country's infrastructure safe.