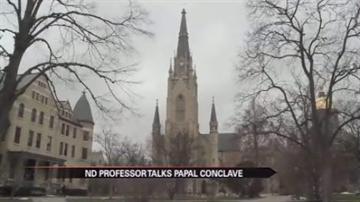 SOUTH BEND, Ind. -- The black smoke from the Vatican means a new pope has not been chosen. Just 77 votes are needed to choose the next leader of the world’s 1.2 billion Catholics. One Notre Dame professor says regardless of your religion, religious leaders like the pope serve as a voice on social and theological issues that affect everyone.

The selection of the next pope isn't too far from the minds of those study and work at Notre Dame.

Walatka is paying special attention to the conclave process, because the next leader will dictate how the church moves forward.

"Running the Vatican is something that's really necessary, because the church really operates at the local level, so you want somebody who's going to enable church leaders, and parishes, and dioceses to do their job well,” said Walatka.

He says Catholics will most likely have to wait a few days before they get their answer.

"The church moves slowly, and that's not a bad thing. There's a sense of the depth of the tradition, staying in continuity with that tradition, and living out of that,” said Walatka.

Walatka says the next pope has to be someone who represents leadership and unity.

"We need someone who is going to bring together various diverse viewpoints within the church. Somebody who can deal well with the divisions caused by the sex abuse scandal. Someone who can reach out to victims, and lead a way forward,” said Walatka.

If the cardinals taking part in the conclave don't reach a decision by Thursday they will take a day off to pray.