Deja vu for Valentine's day: another round of lake effect snow. 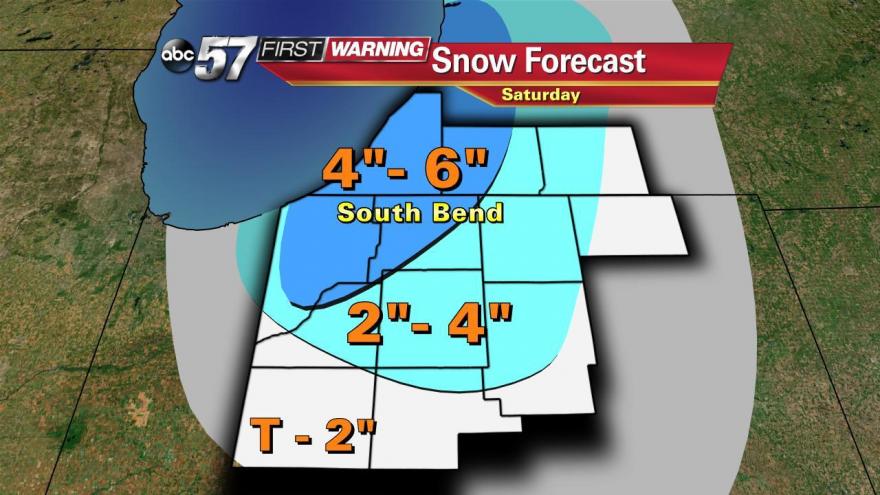 Saturday 6:00 PM Update: Blizzard conditions continue through mid evening. The wind will die down through the overnight hours from the 30 mph rage to the 10 mph range by morning. Lake effect snow will shift east back towards the west before ending across Michiana by morning.

Overall the snow forecast has not changed. Amounts will vary due to the lake effect bands, but 4" to 6" for some, with 2" to 4" for many.

The next hazard remains to be frigid temperatures, and low tank subzero Sunday morning and temperatures don't break the double digits until Monday.

Friday 4:00 PM Update: No change in the forecast, a Winter Storm Warning is now posted for the lake effect counties and Winter Weather Advisory for the rest of the area (Fig 3). The lake effect snow will start after 4 AM and really ramp-up Saturday afternoon and temperatures dive into the lower teens.

Wind, gusting in excess of 25 mph will cause low visibility and keep roads hazardous even when it's not snowing. Use caution while driving Saturday, conditions could change quickly over a short distance.

Round two of lake effect snow hits Saturday, a similar set-up will bring more snow and even colder temperatures into Sunday.

Saturday, temperatures will start in the upper teens to lower 20's then fall from late morning through the overnight as another blast of arctic air surges across the area. That surge of cold air with turn on the lake effect snow once again for Michiana.

Timing and Impact: Mid morning Saturday, lake effect snow begins, blowing northwest to southeast. most the accumulation will be north of U.S. Highway 30. As the wind backs towards the north Saturday afternoon areas along and west of U.S. Highway 31 will see the increase in snow. Finally Saturday night LaPorte and Berrien counties are the only counties still seeing significant snowfall.

Snow totals will be very similar to round one, from Thursday. Most will see 2 to 4 inches of snow with the highest potential north of U.S. Highway 6 and west of U.S. Highway 31 (Fig 1).

Sunday could be the coldest day overall this year with a high of only 8° (Fig 2). The coldest night came in early January when we reached -9°.

Stay with the ABC-57 First Warning Neighborhood Weather Team as they track the cold and snow, get your 10-day forecast here.