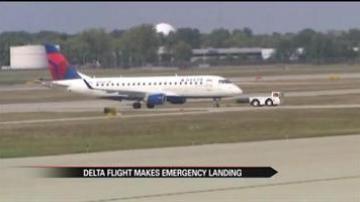 INDIANAPOLIS, Ind. -- A Delta airlines flight was forced to make an emergency landing Tuesday at the Indianapolis International Airport.

As luck would have it first responders were already at the airport for an emergency training drill.

The pilot had no control of the plane but landed it safely.

Crews surrounded it right away.

"The pilot reported a steering issue with the aircraft," said Director of Operations Michael Medvescek.

The flight took off from Chicago and was headed for New York City before it was diverted.