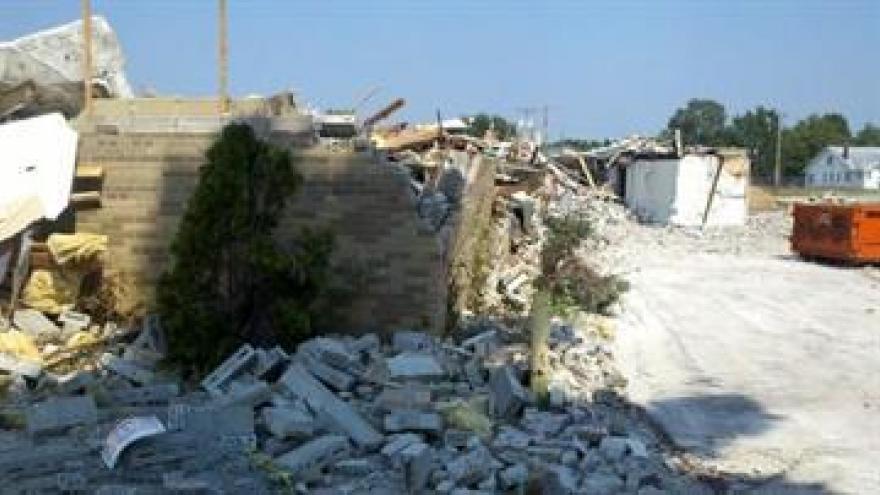 ROSELAND, Ind. – Hotels are big business in the small town of Roseland, especially during Notre Dame football season.  But, the town is now short two hotels along State Road 933.  The Randall's Inn is no more, all that’s left is a pile of rubble and a few standing walls.  The nearby Knight’s Inn has also been demolished.  The sight of the debris has raised eyebrows at nearby businesses.

"We are concerned, that looks terrible…it’s an eyesore," described Julie Anderson, Manager of the Pizza King next to the Randall’s Inn site.

Notre Dame fans flock to the hotels in Roseland due to its location near campus.

“They’re one of our primary businesses,” explained Roseland Town Council Vice President Robin Ackerson.  “Being a toll road exit town we have a need to supply rooms, food, things like that.”

Local businesses, like Pizza King, also benefit from the customer traffic generated from the hotels.

"Especially during Notre Dame football season and, of course, Notre Dame has all sorts of sports camps during the summer,” explained Julie Anderson.  “We do benefit a lot."

Roseland officials, like Ackerson, understand the concerns from businesses.

"I'm sure it's a little distressing,” Ackerson admitted.  “But, change always comes at a price and this is all for the betterment of Roseland."

Ackerson says the demolition sites won’t be empty for long, there are a variety of plans being considered.  The Knight’s Inn site is on track to be the site of a new four-story hotel and restaurant.  Last year the town reviewed plans to build another new hotel at the Randall’s Inn site.

“We do not have the specific site plans, we will be reviewing those with the owner next week,” Ackerson explained.

Local businesses are hopeful the plans will go through and more hotels will spring up around town.

"I know Notre Dame needs more and more hotels and if it brings people up this way we're happy for it," described Julie Anderson.

But, will Roseland be hurt by having two less hotels during the upcoming football season?

“I don’t think it will hurt us in the overall,” explained Robin Ackerson.

Ackerson says there are still plenty hotels to drive traffic through the town.

“People who will be staying in those hotels will probably pass through Roseland, so our other businesses that rely on ‘gang business’ will not be affected,” she explained.

Michiana is nearing the end of construction season, so Ackerson believes residents won’t see new developments until next spring.