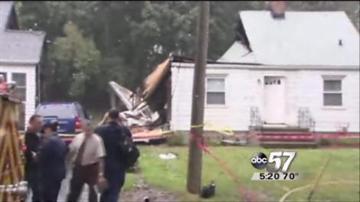 The mayor of East Haven, Connecticut says crews are ready to go but the insurance company for the plane's owner has not signed off on the demolition.

For now, the victims' families are trying to salvage anything they can, including a tea set for the woman who lost her son on that plane.

"It's in good shape except for a small little fracture on the spout where a little piece chipped off," said Dep. Chief John Mannion. "It's a remembrance of a sad day but a loving son. It'll be our honor to send it back to her."

Four people were killed, including the pilot and his son and a pair of sisters inside one of those homes.