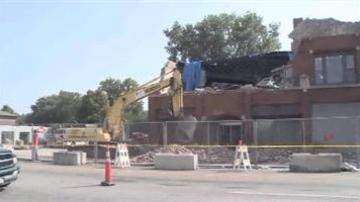 ELKHART, Ind. — Parts of the old Elkhart armory building are a pile a rubble after crews began demolition work on Tuesday morning.

It was a originally a garage and then a roller rink.

The city commission had considering trying to save the two-story building.

But when part of the roof collapsed in the spring, the decision was made to have the building demolished.

"It's sad to see any building go down, this one is in such disrepair that it's a good thing it's coming down because it's dangerous," said Elkhart historian Paul Thomas.

The demolition project is expected to cost about $140,000.

The old armory building sits along the Elkhart River.