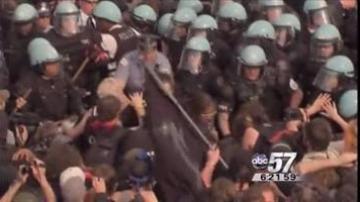 CHICAGO -- On the streets outside of McCormick Place, on Monday, anti-war and Occupy demonstrators targeted Boeing Headquarters.

They claim that tax breaks for the aircraft manufacturer have deprived the state of millions of dollars.

The group also objects to Boeing's role in producing military hardware for the U.S. and its NATO allies.

Unlike Sunday, when the protests turned violent, the day's demonstrations were peaceful.