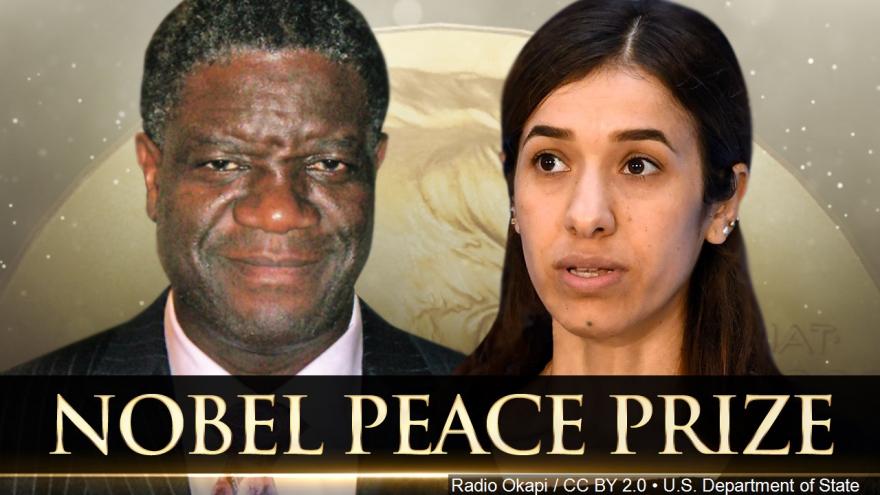 (CNN) -- The 2018 Nobel Peace Prize has been awarded to Denis Mukwege and Nadia Murad for their efforts to end the use of sexual violence as a weapon of war and armed conflict.

Mukwege, a gynecologist and surgeon, has long worked to treat thousands of women and girls affected by rape and sexual violence in the Democratic Republic of Congo.

Murad is a Yazidi woman from the northern Iraqi town of Sinjar, who was held as a sex slave by ISIS, she told CNN in an interview last year. In 2016, at age 23, she was made a UN goodwill ambassador for the dignity of survivors of human trafficking.

"Both laureates have made a crucial contribution to focusing attention on, and combating, such war crimes," said Berit Reiss-Andersen, chair of the Norwegian Nobel Committee, as she announced the award Friday at the Norwegian Nobel Institute in Oslo.

"Denis Mukwege is the helper who has devoted his life to defending these victims. Nadia Murad is the witness who tells of the abuses perpetrated against herself and others.

"Each of them in their own way has helped to give greater visibility to wartime sexual violence, so that the perpetrators can be held accountable for their actions."

Mukwege said he was in the middle of carrying out surgery in his hospital when he learned that he had won the award -- and that he dedicated it to all survivors of sexual violence around the world.

"For almost 20 years I have witnessed war crimes committed against women, girls and even baby girls not only in my country, the Democratic Republic of Congo, but also in many other countries," he said.

"To the survivors from all over the world, I would like to tell you that through this prize, the world is listening to you and refusing to remain indifferent. The world refuses to sit idly in the face of your suffering."

He added that he was honored to be named alongside Murad, whom he praised for her strength and courage.

Mukwege has earned the moniker "The man who mends women" for the work he and his colleagues at Panzi Hospital have done since he founded the clinic in the eastern DRC city of Bukavu 20 years ago.

"Denis Mukwege is the foremost, most unifying symbol, both nationally and internationally, of the struggle to end sexual violence in war and armed conflicts. His basic principle is that 'justice is everyone's business,'" said Reiss-Andersen.

Speaking to CNN in 2009, Mukwege described how vital it was for women brutalized in the course of the DRC's long-running conflict to find support and recognition.

"You just can't imagine how a smile, a simple handshake, to just tell them 'be encouraged' is important to them. To feel they are loved, to feel they can finally find love and affection," he said.

Murad becomes the 17th woman to win the Nobel Peace Prize and is its second-youngest recipient after Malala Yousafzai.

Reiss-Andersen said Murad had "shown uncommon courage in recounting her own sufferings and speaking up on behalf of other victims."

Murad was in Cambridge, Massachusetts, when she learned she had won the prize. "I hope that it will help bring justice for those women who suffered from sexual violence," she told a Nobel official.

"Nearly 6,500 women and children from the Yazidi were abducted and about 5,000 people from the community were killed during that day," she said. "For eight months, they separated us from our mothers and our sisters and our brothers, and some of them were killed and others disappeared."

Murad's mother and six of her brothers and stepbrothers were executed. Murad, along with other unmarried women, was taken as a sex slave and passed around various ISIS militants.

Both winners have "put their personal security at risk by courageously combating war crimes and seeking justice for the victims," Reiss-Andersen said.

She added that the Nobel committee had been unable to reach Mukwege and Murad to let them know about their award before it was announced to the world. "If they are watching this, my heartfelt congratulations," she said.

The UN special envoy for Iraq, Jan Kubis, said Murad had shown "heroism, bravery and resilience in the face of her torturers and abusers" and that the award was a tribute to all Yazidis and other Iraqis who suffered at the hands of ISIS.

The US Embassy in Baghdad also congratulated Murad for her work helping to heal survivors of human trafficking and victims of atrocities.

Physicians for Human Rights, a US-based group, welcomed the award for both winners. "Dr. Mukwege is not only an extraordinary physician, but a courageous human rights leader who perfectly embodies the critical role that medical professionals play in witnessing abuse and speaking out against injustice," said executive director Donna McKay.

There were 331 candidates for the Nobel Peace Prize for 2018 -- the second-highest number ever. Of those, 216 were individuals and 115 were organizations, according to Nobel organizers. The names of the nominees cannot be revealed until 50 years have passed.

Last year's prize was awarded to the International Campaign to Abolish Nuclear Weapons (ICAN) "for its work to draw attention to the catastrophic humanitarian consequences of any use of nuclear weapons and for its groundbreaking efforts to achieve a treaty-based prohibition of such weapons."

The 2016 Nobel Peace Prize went to Colombian President Juan Manuel Santos "for his resolute efforts to bring the country's more than 50-year-long civil war to an end," after brokering a deal with the leftist rebel group FARC.

The Peace Prize is the fourth Nobel award to be announced this week. The 2018 Nobel Prize in Chemistry was awarded half to Frances H. Arnold and the other half jointly to George P. Smith and Sir Gregory P. Winter on Wednesday for their work harnessing the power of evolution to develop new proteins used in drugs and medical treatments. Arnold was the fifth woman to receive the Nobel Prize in Chemistry.

On Tuesday, the Nobel Prize in Physics was given to a woman for the first time in 55 years and for only the third time in its history.

Donna Strickland, a Canadian physicist, was awarded the 2018 prize jointly with Gérard Mourou, from France, for their work on generating high-intensity, ultra-short optical pulses. They share the award with an American, Arthur Ashkin, who at 96 becomes the oldest Nobel laureate, for developing "optical tweezers."

A day earlier, American James Allison and Japan's Tasuku Honjo won the 2018 Nobel Prize in Medicine for a pioneering approach to cancer treatment, which harnesses the body's immune system to attack cancer cells.