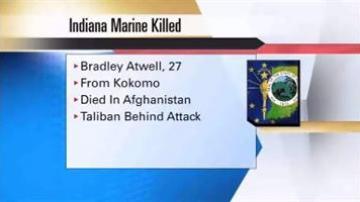 The U.S. Department of Defense has confirmed an Indiana Marine was killed in battle over the weekend.

Bradly Atwell, 27, from Kokomo died in Afghanistan. Members of the Taliban disguised themselves as U.S. soldiers and attacked a British base.

Another Marine was also killed. Six American fighter jets were destroyed in the attack.