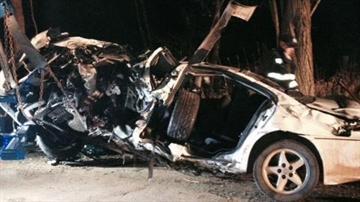 VAN BUREN COUNTY, Mich. -- The Van Buren County Sheriff's Department has released the name of the girl killed in a car accident just before 6 p.m. Sunday in Paw Paw Township.

The 18-year-old driver has been identified as Emily Rose Lauer.

Deputies have not released the names of her passengers.

Seat belts were worn and alcohol does not appear to be a factor in the crash.

The sheriff's office says it appears Lauer was driving westbound on 64th Avenue at a high rate of speed. She drove over a bridge and then lost control of the vehicle.

When she lost control, the 2000 Pontiac Grand Am Hit a tree, rolled over several times, hit at least one more tree and came to a rest upside down.

The driver was killed at the scene and had to be cut from the vehicle.

The female passenger was able to get out of the car on her own.

The male passenger was taken to Bronson Hospital in Kalamazoo.

Deputies say they believe Lauer was trying to go airborne while going over the bridge when she lost control.