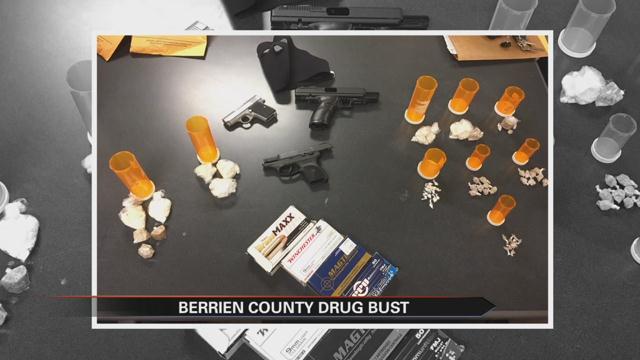 During the apartment raid, police found about 92 grams of heroin, 188 grams of crack cocaine, three loaded semi-automatic pistols, one of which had an altered serial number, and extra ammunition. Scales, packaging materials, and several cell phones were also located inside the residence. Deputies say they also found $380 which supported the allegation of sales.

One teen says she doesn’t think this is the last time she’ll see it happen in her neighborhood.

“It doesn’t really happen a lot but I’ve seen it, this is twice I’ve seen it and you know it’s probably gonna happen again because it’s a lot more around here, that’s just how it is. I mean a lot of people do it. Few get caught, few don’t. Change. That’s all I can say is change for the better,” said 19-year-old Jameka Pritchard.

Now, Chief Deputy at the Berrien County Sheriff’s Department says they’re targeting the issue, specifically. Police say this month-long investigation is just one of many they plan to knock out.

“There is a drug problem in our county. There’s no specific areas. It’s widespread and wherever the narcotics trafficking is taking place in the county, is where we deploy our members to try to curtail it and make arrests,” said Boyce.

Police say it is early in the investigation but they plan on reaching out to federal and state authorities to find out whether or not this is connected to any other drug investigations.