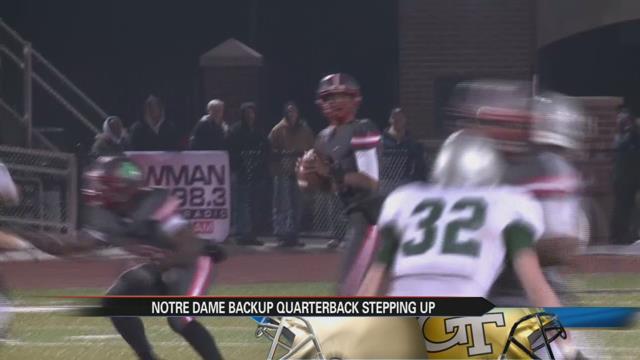 The Notre Dame fighting Irish have been fighting the injury bug early this season. And perhaps the biggest hit is at the quarterback position. Now that starting quarterback Malik Zaire is out for 2015, it's time for backup DeShone Kizer to step up.

After Zaire had season ending surgery for a fractured ankle, he had some advice for Kizer.

"It's time for you to ball is all he kept saying," said Kizer. "To get your mind off of this extra and just ball out as much as I can."

Before Kizer was tapped as the starting quarterback for the Notre Dame Fighting Irish, he was playing for another Irish team at Central Catholic High school in Toledo.

The highly touted athlete garnered attention from top programs for both basketball and football, meaning a tough decision had to be made.

Kizer chose football. And after offers from Alabama, LSU, and Michigan State, his final decision ended up being a golden one.

"Notre Dame from day one was by far the top one of all of those," said Kizer.

And with a national spotlight shining on him he's trying to stay focused.

"I put a lot more focus into my studies whether that be on the classroom or on Georgia Tech," said Kizer. "That kind of keeps my mind off the changes that have occurred in the last few days."