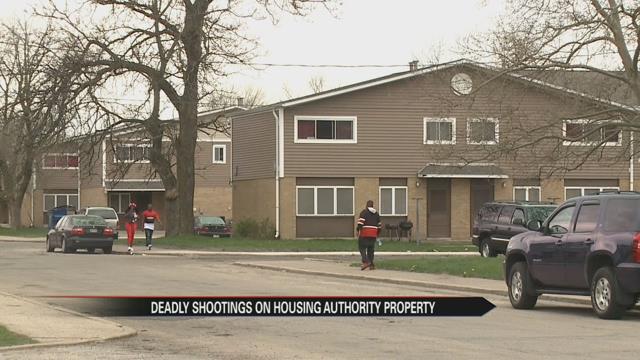 A handful of residents in Washington Gardens say it is time to speak up at a Housing Authority Meeting.

The death of 30-year-old Lavell Evans happened near the home of one woman who says she is scared but is ready to talk about a solution to the violence.

On Wednesday autopsy results confirm Evans died on Monday from a gunshot wound to the head.

This news makes the anonymous woman who lives in Washington Gardens feel like a prisoner in her own home.

“I try to get home by five or six o’clock. I won’t go back out the rest of the night,” says the anonymous woman.

She says like many of her neighbors, she is just too scared.

“What else more can we do than just stay behind the scenes and keep our mouth shut. Because they will tell you keep your mouth shut if they see you witness something,” she says.

The woman’s fear runs so deep ABC57 meet with her at a church parking lot, miles away from Washington Gardens.

“I want to be able to sleep at night with my windows open. So something has to be done and we as residents need to be at that meeting,” she says.

On Thursday there will be a housing authority meeting at 4:30 p.m. at the central office. Like always it is open to the public.

During part of the session, violence is expected to be addressed. Just this month, there were two deadly shootings at Elkhart Housing Authority properties.

On April 5th at the Bannerker Heights complex, 31-year-old Joshua Shaw was found shot inside his SUV.

On April 17th at the Washington Gardens complex, 30-year-old Lavell Evans was shot on Sunday evening.

Kim Sindle the Executive Director of the Housing Authority says he the Board of Commissioners have worked on plans to reduce violence in the past.

“I think it is safe because we do have patrols there and I think our police strategy worked last year so I don’t know why it won’t work this year,” says Sindle.

Sindle says there has been money budgeted for extra patrols. Hiring more police does not necessarily fix the “no snitching” stigma.

“I understand there is a reluctancy, but we want to try to break through that barrier and assure them that this is going to be confidential information,” says Mayor Tim Neese.

Mayor Neese will also be at tomorrow’s meeting. He hopes families show up so city officials can work towards finding solutions.

The anonymous Washington Garden’s resident says it will take many voices in her neighborhood to fight for a normal life.

“We are all living in fear we don’t want to come forward, but it’s got to stop so people need to be at that meeting tomorrow,” she says.