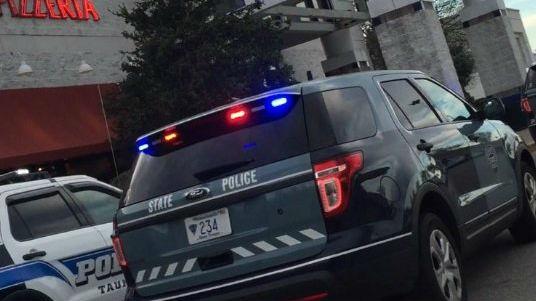 (CNN) -- The man who stabbed two people to death in Taunton, Massachusetts, had been acting strangely and had admitted himself to the hospital the day before the attacks, Bristol County District Attorney Thomas Quinn told reporters Wednesday.

Arthur DaRosa, 28, of Taunton, was killed by an off-duty sheriff's deputy after he failed to obey orders to drop his knife after stabbing a man at a restaurant, authorities said.

Quinn said that officer "reacted in a professional, but heroic manner by taking the only course of conduct that was available to him at the time. He prevented further carnage from occurring by his actions."

DaRosa checked himself into a hospital on Monday evening and was released early the next morning, Quinn said. His sister said he had been making irrational statements earlier Monday and she suggested he seek help. Investigators are looking into that information, the prosecutor said.

He got into a car owned by his daughter's mother, struck a parked car and then tried to enter several homes, Quinn said.

Inside one house, he stabbed two women, Patricia Slavin, 80, and Kathleen Slavin, 48. The older woman died, and the younger one was listed Wednesday in stable condition, according to Quinn.

DaRosa then took another car and crashed it into the front door of a Macy's at the nearby Silver City Galleria mall.

He assaulted three people there, then made his way to Bertucci's restaurant in the mall, where he got a knife and stabbed a waitress, Sheenah Savoy, 26, according to authorities.

He then stabbed a witness, George Heath, 56, in the head, authorities said. In a statement, Quinn said Heath intervened to help the waitress and quite possibly saved her life.

Heath died of his wounds. Savoy was in critical condition at Rhode Island Hospital, according to authorities.

James Creed, an off-duty, plainclothes deputy having dinner with his wife, told DaRosa to stop. DaRosa didn't comply with the order, was shot once in the abdomen and died, according to authorities.

Quinn declined to comment on possible mental issues, but said they would be a line on inquiry in the investigation.

Quinn said DaRosa's sister said her brother had been acting strangely the day before the stabbings, making weird statements. He admitted himself to Morton Hospital in Taunton on Monday but was released.

The decision to release DaRosa is under investigation, authorities said.