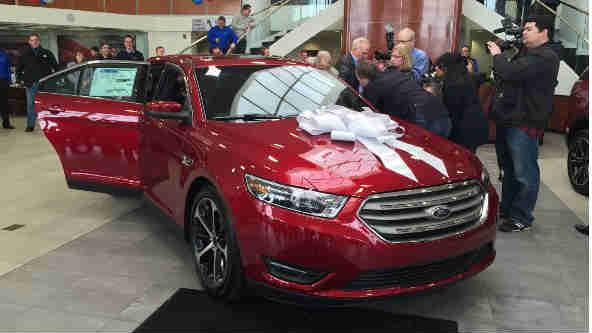 The world's most famous commuter thought he was meeting friends for lunch Friday to close out a wild week in the spotlight.

But James Robertson, whose 21-mile round-trip work commute garnered worldwide attention and more than $300,000 in donations, got more than just lunch.

Blake Pollack, who befriended Robertson 1½ years ago and has helped drive him to media interviews all week, helped pull off the surprise, suggesting they stop by a car dealership after lunch to pick up some brochures and start researching cars.

Robertson and Pollack were joined by Evan Leedy, the college student who set up a GoFundMe page on Robertson's behalf. They walked into Suburban Ford in Sterling Heights, Michigan, and instead of brochures, saw a shiny red car topped with a big bow.

"There must've been 200 people there to welcome him," Pollack said. "I though he was going to fall over."

When asked if he liked his new car, which has already been insured, Pollack said Robertson was quite clear.

'I never thought anything I did would garner this much attention'

Before receiving his new wheels, Robertson had trudged the better part of a marathon each workday, taking buses part of the way -- rain, snow or shine. But he never thought it was any big deal.

"I never thought anything I did would garner this much attention," Robertson said.

After reading about Robertson's commute in a Detroit Free Press article that went viral, Leedy was moved. Like Robertson, the 19-year-old lives and works in two counties, so he spends a great deal of time commuting himself. But Leedy has a car.

Leedy decided to set up an online fundraiser to buy Robertson a car.

Robertson, in a video message posted on the Free Press website, gave thanks.

"Everybody calls me the inspiration, but to those who have been great enough to donate and everything ... it was really so welcome that I don't know what to tell you," he said. "You guys are the heroes."

Comments on the page from people donating money suggested the story of Robertson's dedication to getting to work had tapped into a deep well of public feeling.

"Thank you for inspiring me and hopefully tons of other people to persevere in the face of adversity," said a contributor by the name of Kevin LeMelle. "You are a true American hero."

"We could use more men like James Robertson in this world," wrote a donor named Betty Blanchard.

"Climbing over snow banks, when it was pouring down rain in the summer," Pollack said, "Whatever the weather, he was there."

Pollack approached Robertson, who told the financial executive his story. Pollack promised to give him a ride the next time he saw him.

"Two to three months later, I saw him on a corner," Pollack remembered, "and I asked if he needed a ride to work."

Pollack estimated he's given Robertson between 40 and 50 rides since then, and the two men from vastly different worlds have formed an unlikely friendship.

The pleasure, Pollack said, has been all his.

'I set our attendance standard by this man'

"I'm the lucky one," Pollack said. "Driving him around isn't a chore, it's a reward."

Pollack said Robertson is inspirational and funny, adding that his work ethic puts anyone to shame.

"I set our attendance standard by this man," Todd Wilson, plant manager at the engineering factory where Robertson works, told the Free Press. "I say, if this man can get here, walking all those miles through snow and rain, well I'll tell you, I have people in Pontiac 10 minutes away and they say they can't get here -- bull!"

Robertson apparently has a perfect attendance record. He earns $10.55 an hour, not enough to save up to buy, insure and operate a car in the city, according to the newspaper.

When the online donations rolled in, Robertson, Pollack and Leedy met together for the first time this week.

"Now that [the effort] is so big, there's so much more to think about," Leedy said.

There are people who want to take advantage of Robertson's newfound celebrity and his generosity, Pollack said. He put together a team that includes an attorney from a large law firm in Michigan, a CPA and a certified financial planner that he says will ensure the donation money is handled appropriately and in a way that best serves Robertson.

"This money that is being given to him -- he earned every penny of it," Leedy said, just by his work ethic and his attitude.

He's been making the arduous 21-mile commute between Detroit and Rochester Hills since his 1988 Honda Accord gave up on him, but not anymore.

Before receiving the car Friday, Robertson said the addition of a car to his life would mean a lot more sleep. But he loves where he works, so he has no plans to change much else.

"I can't imagine not working," Robertson said. "It's what I've always done."

Robertson, in his message, said he never expected as much support as he has received. He encouraged people to look out for one another.

"If this story will touch at least one person and inspire them to do something out of the goodness of their heart, I will be the happiest person alive," he said.