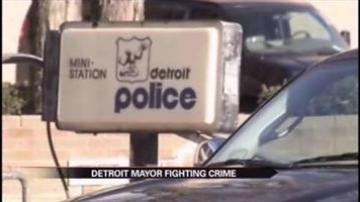 DETROIT -- Detroit's mayor is taking action to stop crime in his city.

The mayor announced plans to open 13 mini-police stations around the city.

Those stations will be in places like recreation centers and shopping malls.

Staff will include a permanent officer and a volunteer.

"The return of the police mini-stations will increase the police presence in our communities and improve public safety for our citizens," the mayor said. "A permanent police officer will be assigned to each mini-station and residents will be able to interact with a neighborhood officer on a regular basis."

The first six of these stations opened Wednesday. The rest of the mini-stations will be open by next March.