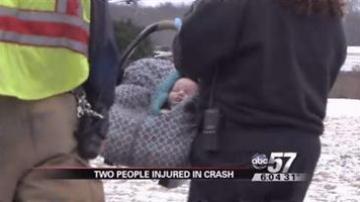 PLYMOUTH, Ind.-- A devastating car crash on U.S. 31 sent a man and his 6-month old baby to the hospital today.
"A couple of years ago my boyfriend and his son were rear ended and hurt pretty good."

And Monday's accident was similar.

"It appears a car came out of the turnoff right there and pulled out in front of a semi," said Lieutenant John Knepp of La Paz North Fire Department.

Emergency crews found the driver of the mini van thrown from the vehicle, 30 to 40 feet from the road.

"They airlifted him out and that to me is just devastating. I cannot imagine," said McMahan

She believes the intersection's high speeds contribute to the number of accidents.

"I know they come from this light here and people fly. And they're always in a big hurry. They need to change the speed limit here i think because of that area."

But officials say, drivers need to slow down and pay attention.

"The best thing you can do is just pay attention, be a defensive driver, watch your speed and be aware of what other cars are doing" said Knepp.

The driver of the semi was not hurt in the accident.

The accident happened at the intersection of U.S. 31 and 6 when a semi smashed into the side of a mini van.

The driver of the mini van was ejected from the vehicle and suffered critical injuries. The infant was strapped into the car but was injured.

The crash is still under investigation, but officials say they believe the mini van pulled out in front of the semi.

Local residents say this intersection is known for causing multiple accidents each year.

Mary McMahan lives near the scene of Monday's accident.

"There's always some sort of accident going on out here," said McMahan.

She's had her own experiences with the dangers of the intersection.