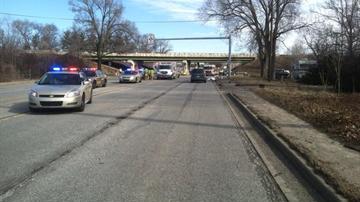 SOUTH BEND, Ind. - A man was hit and killed by a car on State Road 23 Sunday morning.

The accident happened near the Toll Road underpass and S.R. 23 before 11 a.m.

Douglas to Cleveland is still closed due to the accident investigation at the time of this posting.

A man, on a bicycle was on S.R. 23 when he was hit by a compact car. The force of the impact caused the bike to get stuck into the front of the car.

The woman driving the car was the only one in the vehicle, she was taken to the hospital with non-life threatening injuries. The Sheriff said that she was probably more shocked than anything. Her medical condition is unknown.

The driver of the car has not been identified.

The man on the bike was wearing a helmet at the time of impact. He was pronounced dead on the scene.

ABC 57 News has learned that the victim was 62-years-old. His name has not been released.

We will have a LIVE UStream update at 1p.m. on this fatal accident. Click here to join in on the LIVE streaming coverage now!