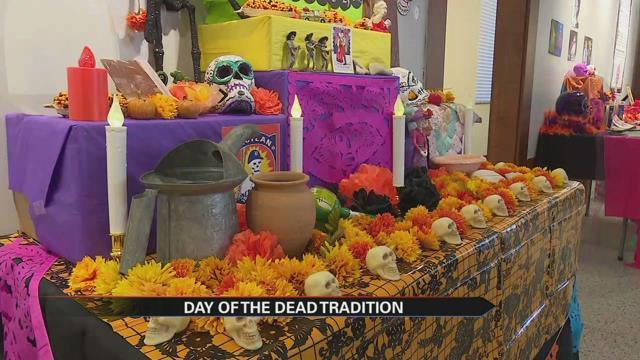 Across South Bend schools and community centers are celebrating a tradition focused on death. Día de los Muertos is similar to All Souls day in the Catholic tradition in that it is a day to remember the deceased.

At the Notre Dame Center for Art and Culture there are alters honoring families, celebrities, and even influential figures in South Bend.

For the first time in15 years of having an exhibition of alters, the center has called on community members to create 15 different alters.

“Well usually we bring in a guest artist and have them take over the space and this year we decided it would be much more engaging for the community to participate,” says Alex Schaufele, the Art Coordinator at the Notre Dame Center for Arts and Culture.

Community members followed tradition and honored the lives of their loved ones by placing some of their favorites on display like pictures, sodas, sugar skulls, flowers, and candles.

“It’s such an engaging and joyous thing to see it’s how somebody celebrates life and I don’t think it matters what your cultural background is,” says Schaufele.

Día de los Muertos is celebrated throughout Latin America and in South Bend, the exhibit is open for the public to attend and learn something new.

At John Adams High School, one Spanish teacher is also hoping to teach her students more on this tradition.

“If you go to the grocery store or even target you see more day of the dead stuff which means the community is growing and it’s important to learn about the community,” says Cecilia Stanto-Verduzco, a Spanish Teacher at John Adams High School.

Stanto-Verduzco says for years her students have studied Día de los Muertos but this was also the first year Spanish student made their own alters.

“I know about it because I am Mexican, but we don’t celebrate it here I feel like the tradition has been lost over the years while moving countries,” says Gisela Morales who is a senior.

Morales along with many other students say now seeing these decorations have taken on a new meaning and it’s one that could help in understanding the diverse community they live in.

“Here we mourn death instead of celebrate life and so I think it was very important to understand that and know why people would do all of this when someone passes away,” says Dyanara Leija, also a senior.

The last day for the exhibit is on Wednesday. The center will be holding a celebration with food and music from 5 p.m. to 7 p.m. The event is free and open to the public. The Notre Dame Center for Arts and Culture is located at 1045 Washington Street.