Dispatch sounds tornado sirens in Goshen just to be safe 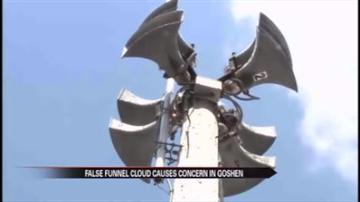 GOSHEN, Ind.-- Residents in Goshen were panicking earlier this week because of a cloud that looked like a funnel cloud. Because of that cloud, actually a scud cloud, Elkhart 911 dispatch sounded the tornado sirens.

The assistant director of 911 dispatch says he would rather err on the side of caution and the community take cover for nothing than be unprepared for a tornado.

The picture of the cloud that they thought was a tornado was actually a scud cloud.

According to ABC57 meterologists, a scud cloud is a fast moving, low hanging cloud that a lot of people mistake for a funnel cloud.

Dispatch says if someone reports a tornado on the ground they will sound the siren.

Elkhart County's Emergency Management team says they have no control over those sirens.

Mike Pennington said, “Fortunately for all of us there was no damage incurred and there was actually no tornado, but many people were alert and aware to be prepared.”

Dispatch says they don't contact the National Weather Service before the siren is sounded in fear that it would be too late and a tornado would strike unexpectedly.

Pennington said, “It turned out that the National Weather Service didn’t have anything and there did turn out to be some clouds. We’re always proactive in trying to warn folks here in the area and that’s why we are a storm ready county.”

Elkhart County's Emergency Management team said they can't do anything about the sirens that sounded, but they do encourage people to buy a weather radio.

Pennington said, “I’m not aware of anything that would change or be done differently, our agency is not involved until after there is some damage.”