Doc accused of fraud will stay in jail 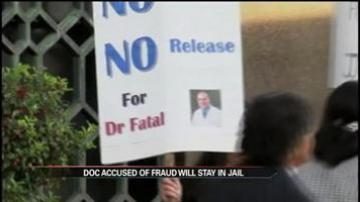 A Michigan doctor accused of misdiagnosing patients on purpose will stay behind bars.

Wednesday, a judge revoked his $9-million bond and now doctor Farid Fata will stay in prison until his trial.

Fata's lawyer had asked the judge to lower his bond to $500,000, but former patients protested against his possible release.

"I think he's got money squirreled away everywhere. He's got ties in Lebanon, a home in Lebanon. Why wouldn't he leave facing prison here for maybe his life," said Jeff Berez, the son of a patient who died under Fata's care.

His trial is set for February 2014. If convicted he could spend 20-years in prison.