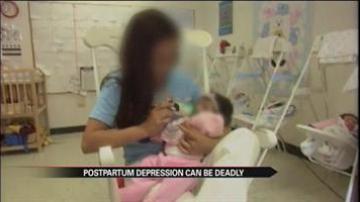 SOUTH BEND, Ind. -- Doctors say things can spiral out of control pretty quickly if a mother has post-partum depression and doesn't get help. It's normal for a new mother to feel anxious and nervous when bringing a baby hope, but if those feelings turn to anger or deep sadness that lasts more than a couple weeks - it's time to get help.

Psychiatrist Dr. Jagadeesh Reddy says there are major red flags to look for in a new mother.

"Withdrawing from the baby, not really caring so much for the baby, they have poor sleeping habits and self isolation," said Dr. Reddy.

He says about a third of moms fall into depression once they bring their newborn home.

Waves of hormones in a woman's body are usually to blame.

But if the depression lasts longer than two weeks, it could be something serious.

"That's when you realize, it's just not blues, it more severe than that," said Reddy.

Dr. Reddy says women who have a history of depression or mental health illness have a higher risk of getting post-partum depression.

"They are the women who are like 50 times more prone for postpartum depression so we have to be very careful with that," said Dr. Reddy.

He says family history is just as important.

"If their mother or sister had the same symptoms of postpartum depression, they are 30 percent more prone for this," said Dr. Reddy.

Dr. Reddy says there are other factors as well.

"Being a single mom, unplanned pregnancy, previous drug abuse history by the mother, these are all big risk factors," said Dr. Reddy.

If postpartum depression goes untreated the symptoms will get more and more severe.

He says in extreme cases, some mothers even suffer from postpartum psychosis.

"The mom goes into a phase where she starts hearing voices and even hurt the baby," said Dr. Reddy.

Doctors say the key is addressing even the most minor symptoms early.