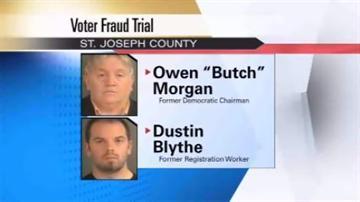 Tuesday’s court proceedings began with the testimony of one of the state's key witnesses, Courtney King.

King is a forensic document examiner for the Indiana State Police.

She was assigned to examine writing samples from the four people charged in this case and compare those samples to the forged petitions.

Tuesday she testified that she identified Dustin Blythe as the writer of 9 of the printed names on the 2008 Obama petition.

But she could not identify Blythe as the writer of the signatures.

She says it is probably that he wrote those signatures, but due to a lack of evidence in his provided samples, she is not certain.

The defense spent the majority of the day breaking down the science of forensic document examination arguing that it is not an exact science.

The defense argued that King cannot prove with any certainty that Blythe was the one who wrote those signatures.

Beverly Shelton and Pam Brunette, who were charged in this case and already pleaded guilty testified Tuesday as well.

Nine people who claim their signatures were forged on the 2008 Obama petition also testified Tuesday.

The state rested and the defense says they will not be calling any witnesses.