Does stress play a big role in developing cancer? 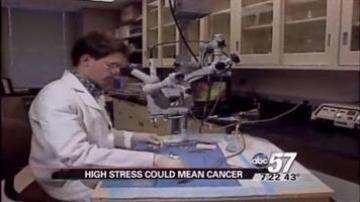 Could being too stressed cause cancer?

The mice were exposed to Ultra-Violet rays equivalent to spending too much time in the sun, for humans.

All of the mice developed skin cancer, but the anxious mice had more tumors.

The nervous mice had higher levels of cells that were immune deficient.

Those in charge of the study said, stress breaks down the body's ability to fight off disease.