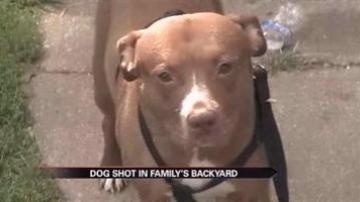 SOUTH BEND, Ind. -- A South Bend family's beloved dog is recovering after trespassers shot her in the leg. Just after 9 p.m. on Thursday night, police were called to the family's home off Johnson Street after receiving several phone calls for shots fired in the neighborhood.

Tawnia Thomas and her kids were settling in for the night when all of sudden she heard her three dogs going berserk in the backyard. "The next thing I heard after the barking was gunshots," said Thomas.

Thomas said she looked out the window and saw the unmistakable flash coming from the barrel of a gun. she said she heard five or six gunshots before everything fell silent again. "After the shooting I didn't hear my dogs anymore and I got scared".

She called police, while her son brought the dogs in from the backyard. That is when the kids noticed their pit bull, Coco, had been shot in the leg. Thomas said if it were not for Coco, the situation could have been a lot worse, "If I did not have dogs, then we would never have stopped them".

Thomas said she found the gate leading to her backyard propped open. She thinks it was Coco that surprised the "would-be" intruders and that is why they shot the dog.

As upsetting as it is to see her dog injured, Thomas said she is just grateful it was not one of her kids."My kids have sleep overs and swim in the pool, so yea it could have easily been one of my kids".

Later, her son even found one of the bullets on their porch, "You could see where it had logged into the door and then fell to the ground. Then, we found the hole in the porch wall".

Thomas said the neighborhood would be a lot safer at night if there were more than just two street lights on their block. "We are going to do our own things, as far as precautions, for our family because we've got kids and even if we didn't have kids, we have to protect ourselves".

Fortunately, the bullet went straight through Coco's leg and she is expected to make a full recovery. As for the shooter, police have not made any arrests.