Donald Trump bounces into the lead 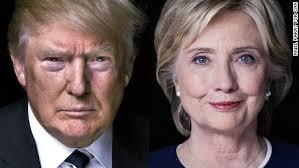 Donald Trump comes out of his convention ahead of Hillary Clinton in the race for the White House, topping her 44% to 39% in a four-way matchup including Gary Johnson (9%) and Jill Stein (3%) and by three points in a two-way head-to-head, 48% to 45%. That latter finding represents a 6-point convention bounce for Trump, which are traditionally measured in two-way matchups.

There hasn't been a significant post-convention bounce in CNN's polling since 2000. That year Al Gore and George W. Bush both boosted their numbers by an identical 8 points post-convention before ultimately battling all the way to the Supreme Court.

The new findings mark Trump's best showing in a CNN/ORC Poll against Clinton since September 2015. Trump's new edge rests largely on increased support among independents, 43% of whom said that Trump's convention in Cleveland left them more likely to back him, while 41% were dissuaded. Pre-convention, independents split 34% Clinton to 31% Trump, with sizable numbers behind Johnson (22%) and Stein (10%). Now, 46% say they back Trump, 28% Clinton, 15% Johnson and 4% Stein.

The poll also reflects a sharpening of the education divide among whites that has been prevalent throughout the campaign. Among white voters with college degrees, Clinton actually gained ground compared with pre-convention results, going from an even 40% to 40% split to a 44% to 39% edge over Trump. That while Trump expanded his lead with white voters who do not hold a college degree from a 51% to 31% lead before the convention to a 62% to 23% lead now.

Beyond boosting his overall support, Trump's favorability rating is also on the rise (46% of registered voters say they have a positive view, up from 39% pre-convention), while his advantage over Clinton on handling top issues climbs. He now holds double-digit margins over Clinton as more trusted on the economy and terrorism. Trump also cut into Clinton's edge on managing foreign policy (50% said they trusted her more, down from 57% pre-convention).

The convention also helped Trump make strides in his personal image. A majority (52%) now say Trump is running for president for the good of the country rather than personal gain, just 44% say the same about Clinton. He's increased the share who call him honest and trustworthy (from 38% to 43%), and who would be proud to have him as president (from 32% to 39%). And nearly half now say he's in touch with the problems ordinary Americans face in their daily lives (46% say so, 37% did before the convention).

Despite Democratic criticism of the Republican convention's message as divisive, the percentage who say Trump will unite the country rather than divide it has increased to 42%, compared with 34% pre-convention.

Clinton's ratings on these same measures took a hit, though in most cases her drop-off was not quite as large as Trump's gain. Perhaps most troubling for the Clinton supporters gathering in Philadelphia this week: 68% now say Clinton is not honest and trustworthy, her worst rating on that measure in CNN/ORC polling.

Those positives for Trump come despite some sharply negative reviews for the convention itself. Almost 6 in 10 (58%) said the Republican convention spent too much time attacking Democrats, and 18% called Trump's speech "terrible," the highest by far since CNN started began the question in 1996. Still, 40% called the speech excellent or good and about half of voters (45%) said Trump's speech reflected the way they feel about things in the U.S. today; 48% said it did not reflect their views.

The public rendered a split decision on whether the convention made them more or less likely to back Trump, 42% said more likely while 44% said less so, but the shift in voter preferences suggests the "more likely" side carried more weight. And most came away feeling ready to decide about Trump's fitness for the job: 78% say they already know enough to know whether he'd be a good president. Another 20% think they need more information.

Cruz's move, however, appears to have backfired. While 60% of Republican voters had a positive impression of the former presidential candidate before the convention, just 33% have one now.

The Trump campaign has claimed the visceral negative reaction to Cruz reflected the unity the party feels behind Trump himself. But the poll suggests a large share of Republican voters still need to be won over. The share of Republicans who say their party is "united now" climbed from 16% pre-convention to 24% post-convention, but about half (49%) say it's not united now, but will be by November, and there are still about a quarter who say the party won't unite at all. Further, 45% continue to say they'd prefer someone other than Trump as the nominee.

The CNN/ORC Poll was conducted by telephone July 22-24 among a random national sample of 1,001 adults. Results for the sample of 882 registered voters have a margin of sampling error of plus or minus 3.5 percentage points.