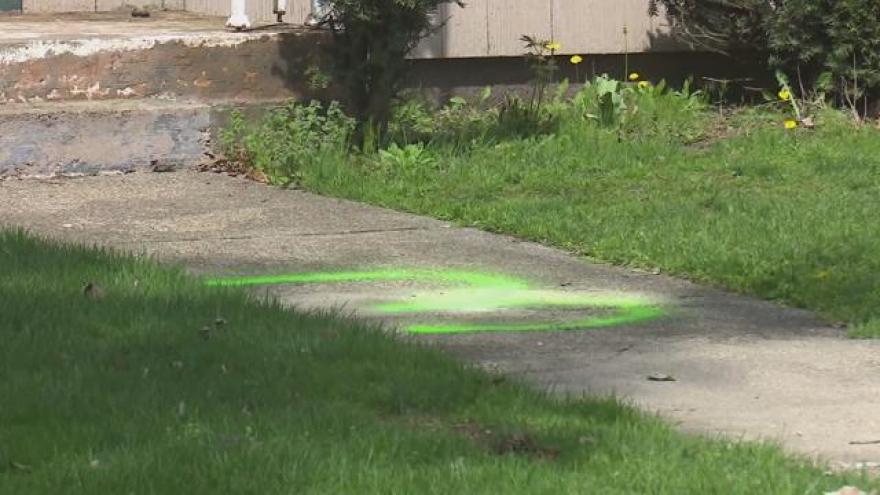 A suspect is still on the loose, after two teenagers were shot and injured on College Street in South Bend, late Monday night. The neighborhood woke up to more shots fired, just hours later, early Tuesday morning.

Three spray painted numbers on the pavement is all that is left from shots being fired overnight.  In the first shooting, a 16-year-old girl and a 15-year-old boy were hit.

The girl was shot in the ankle and the boy sustained a gunshot wound to the hand.  They were taken to Memorial Hospital for treatment Monday night.

The woman who lives at the home where the events occurred with her three children, did not want to go on camera, but told ABC57 everything she knew.

Her 19-year-old nephew requested to film a music video with his friends in the backyard of her home.  The garage, climbing with ivy, served as a perfect backdrop.

She had allowed him to film there before, and decided to permit it again, not knowing what a frightening turn it would take.

She was on her way home from the store, kids in tow, when she her gunshots coming from her driveway.

A girl, holding her ankle, was screaming that she had been shot.   Bullet holes pierced the car that the girl was standing next to.

The 15-year-old victim and two unknown figures ran just around the corner to Adams Street.

Police came, searched the grounds, and cleared the scene about an hour later.

But it wasn't over for this Northwest neighborhood.  Just after midnight, neighbors were woken up by shots again.

Police responded once again, but did not find any victims or damage.

Now, that South Bend mother is left picking up the pieces of glass, left from the shattered car window, as she and the police wonder who was the shooter, and why did they pull the trigger.

They're not the only ones: Andrew Kayper and his family want answers, too.

"We heard about six pops in continuous succession," he recalls.  "I [hoped] they [weren't] gunshots."

But they were, Kayper's family has lived in the neighborhood for two years.

It's not unusual for them to hear some alarming activity, but never so close to their front door.

Although his fear won't let stop him from enjoying his South Bend home, he makes sure his family stays safe and aware.

"It's always in the back of our minds, but you can't stop living your life because something bad might happen," Kayper adds.

Anyone with information is encouraged to call the South Bend Police.