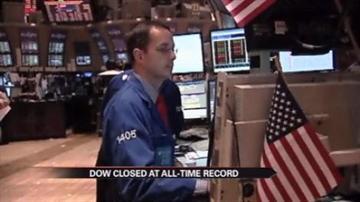 Experts say this surge in stocks is happening because of growing consumer confidence, low interest rates and a recovering housing market.

Still, other traders warn that the economy is still weak and that unemployment is still high, so it is not time to celebrate just yet.

"You don't' see the champagne bottle and the confetti coming down from the ceiling or balloons because there is still a very, very big disconnect between what the market is telling us and what the economy is telling us," said Ken Polcari, trader O'Neil Securities Incorporated.

Tuesday's record beats the previous record that was set in October 2007 just before the collapse of the economy.