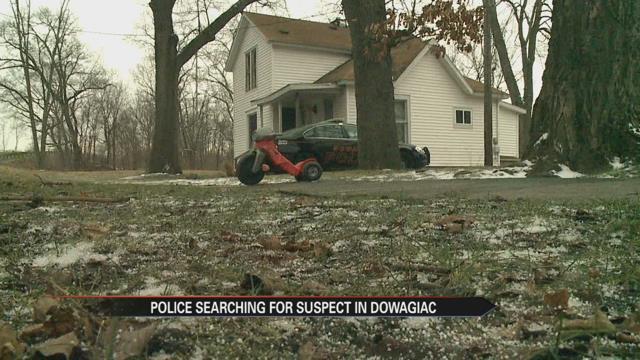 Dowagiac Police were searching for a suspect Friday that may have been involved in a case of criminal sexual conduct.

"We received a call around noon today of an incident that occurred at the house here behind me last night," Director of Dowagiac Public Safety Steve Grinnewald said.

According Grinnewald, they were notified around 12:00 p.m. Friday of an alleged act of criminal sexual conduct that may have taken place Thursday night.

Dowagiac Police, along with officers from the Michigan State Police and the Cass County Sheriff's Department, arrived to the home in the 100 block of Pokagon Street in Dowagiac around 2:00 p.m. to search for a male suspect.

Grinnewald said a number of officers surrounded the home with guns drawn in an abundance of caution.

"Does [the suspect] have [any weapons]?" Grinnewald said. "We don't know. So we did take precautions at that point, there was weapons displayed, but obviously we didn't have to use anything."

As of now, police say they have not found the suspect and no arrests have been made.

Grinnewald said the victim and the suspect knew each other and that this was not a random occurrence.

Police also said, while the suspect has a history of violence, including violence with the police, they do not believe the public is in any danger.

"We do not have any indication that he's armed," Grinnewald said.

If you have any information on this case, please contact police.