Dozens of commuters injured when NYC train comes off track 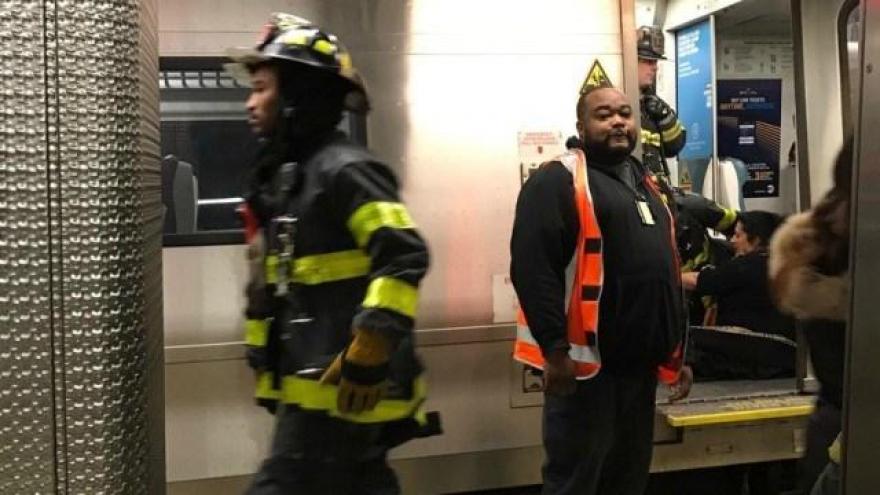 NEW YORK (CNN) -- A transit train went through a bumper block and came off the track at a New York station during Wednesday's morning rush hour, the city's fire department said.

The train had come to the end of the line at the Atlantic Terminal Station in Brooklyn, officials said, but crashed into a small room just beyond the end of the track. It is unclear how fast the train was going.

At least 103 people suffered injuries, the fire department said. New York Gov. Andrew Cuomo told reporters the person with the most significant injury was a woman with a possible broken leg.

Cuomo described it as a "relatively minor" accident and said it "wasn't really a derailment."

Two cars came off the track, and a piece of the rail pierced the bottom of one of those cars, said Dan Donoghue, a deputy assistant chief.

"It could have been quite a bit worse without a doubt," Donoghue said. "We were fortunate. I don't believe there was anyone in the room (that was struck)."

The cause of the incident, on Long Island Rail Road Track 6, was not immediately clear. Fire officials deferred additional questions to the Metropolitan Transportation Authority.

MTA President Thomas Prendergast said there was some damage at the station but said everything should be running smoothly by afternoon rush hour.

One witness, who only wanted to be identified as Sophie, saw the aftermath of the incident from the platform. She posted a photo of a mangled train door with a window busted.

"I went onto the platform because the train I needed to board was on the track on the other side of the platform," Sophie said.

"While on my train, I saw teams of firefighters and police rushing in to help. A few people were still on the train, and others who had gotten off were a little bruised but emotionally shaken," she said. "A few people were crying and calling their loved ones. Dozens were trying to take photos."

A man told CNN affiliate WCBS-TV he thought the train was going its regular speed but didn't stop.

"People who were standing up to exit the train all toppled on top of each other," said the man, identified only as David.

Other witnesses told CNN affiliates they thought the train was going too fast.

"Typically, when you're coming into Atlantic Terminal, the train goes very slow. Today, I was saying to myself as we were coming in, it was going faster than usual," an unidentified witness told WABC-TV. "And before you knew it, the impact and people were, like, flying. ..."

A woman named Amanda told WCBS: "It was total chaos, there was smoke on the train and we were sitting there in shock."

Federal Railroad Administration investigators are en route to the Brooklyn station, according to an agency spokesman.

In October, a Long Island Rail Road train derailment left 33 people injured. The first three carriages of the 12-car train derailed about half a mile east of the New Hyde Park station.

In that case, the train derailed after colliding with part of a work train running in the same direction on an adjacent track, Prendergast said.

A piece of equipment from the work train ended up "violating the clearance envelope of the other track," he said.

A month earlier, a New Jersey Transit train plowed into a major station in Hoboken during the morning commute, killing at least one person and injuring more than 100 others. The cause of the crash remains under federal investigation.