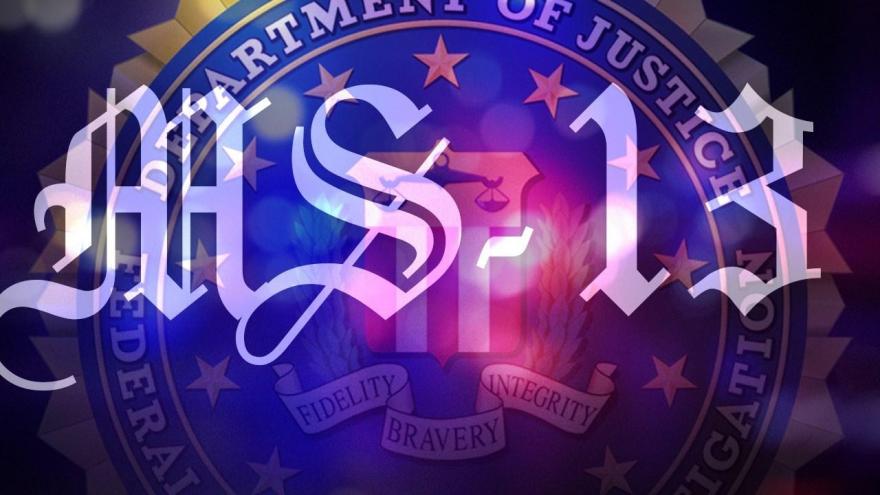 The pre-dawn raids, aimed at catching suspects asleep or off guard, also focused on nabbing members of MS-13's core leadership, the Bureau of Alcohol, Tobacco, Firearms and Explosives (ATF) said.

Los Angeles is the US base for MS-13, which has tens of thousands of members worldwide. Authorities have called the gang one of the largest criminal organizations in the US.

It's an operation that's been years in the making.

Federal agents say the investigation, which began in June 2014, targeted the leadership and the most violent members of MS-13 in Los Angeles and the gang's links to the Mexican mafia.

"We believe the most impact is made by targeting the mid- to upper-level hierarchy of the gang and removing them," said Eric Harden, special agent in charge of the ATF's Los Angeles field division.

"Once removed, it causes a disorganization of the gang, where it suppresses their activity for an extensive amount of time until another leader is developed or steps up."

The ATF says the gang makes money from extortions, kidnappings, drug and weapons trafficking and human trafficking. Killings for the protection of the gang are common, say federal authorities, and are sometimes carried out with machetes.

Harden has faced off with MS-13 for decades, dating back to his days as a street agent.

"They've been here since the '80s and have thrived to this date," said Harden. "They're a transnational or international gang. Their level of brutality is extreme and high, similar to what we read about and hear with the drug trafficking cartels in Mexico."

MS-13 began in Los Angeles in the 1980s during a flood of El Salvadorians fleeing to the United States. Its offshoot in Central America took hold when many of the members were deported.

The US Justice Department estimates about 30,000 members worldwide and more than 10,000 in the United States -- a number that has held steady for some years but that the department believes is trending upward.

MS-13 is active in 40 US states, plus the District of Columbia.

Authorities say the gang is known for forcing new members to endure a 13-second beating known as "jumping in." Members beat the new member with fists and bats in videotaped beatings often lasting far longer than the touted 13 seconds. Women who join the gang either jump in or are "sexed in," having sexual relations with MS-13 members.

Back in the spotlight

Despite the long history Los Angeles authorities have with MS-13, the gang has found a recent spotlight under the Trump administration as part of its border security and immigration enforcement efforts, though the administration has been unable to provide reporters any data on how many MS-13 members are believed to be in the United States illegally.

Just this week, at the National Peace Officers' Memorial Service, President Donald Trump said, "MS-13 is going to be gone from our streets very soon, believe me."

Last month, Trump tweeted MS-13 was allowed to thrive due to the immigration policies of the Obama administration, even though the gang has been in the United States for decades. Federal agents said this investigation began three years ago, under President Barack Obama and now-fired FBI director James Comey.

Experts say there is little statistical evidence that MS-13 is more prevalent in recent years or more dangerous to the US than other gangs.

Their methods are particularly brutal, experts say, and in recent months several high-profile gruesome killings have made news across the nation.

But Jorja Leap, an anthropologist and longtime gang researcher at UCLA, said the danger of MS-13 certainly isn't new.

"This attitude that there's a brand new threat and it's new and it's all immigration, there is not a piece of that narrative that is accurate," she said.