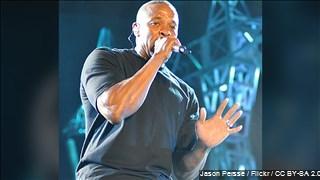 (CNN) -- Dr. Dre was briefly detained and issued a citation outside his home Monday morning after police received a call from a motorist who alleged he had been threatened with a gun, Los Angeles County Sheriff's Department confirms to CNN.

The caller claimed he had parked his car in front of a Malibu residence when the owner of the home ordered him to leave and showed a handgun, police said.

Upon arriving at the scene, police detained the "Straight Outta Compton" producer, who matched the description provided by the caller, according to the police's statement.

"Due to the nature of the call, the person was searched, handcuffed, and briefly detained in a patrol car while deputies investigated the incident," the statement said.

According to the sheriff's report, Dre, whose real name is Andre Young, asked the driver to leave because his vehicle was blocking his driveway. The man drove off, but immediately returned and parked nearby, Dre told police. When Dre took out his cellphone to film him, the man left, according to the police report.

Police described the Grammy-winning producer as "cooperative." He consented to being searched and denied the handgun and threat allegations, police said.

No weapon was found at the scene and the rapper was not arrested or taken into custody, the sheriff's department said.

Dr. Dre, who rose to superstardom in the late 1980s as part of gangsta rap pioneers N.W.A, has not commented on the incident.

But the driver, who police declined to identify, "initiated a private person's arrest of Mr. Young for misdemeanor brandishing a firearm," police said. Dr. Dre was given a citation that requires him to appear in court.