Draft is done, so where are the Irish heading? 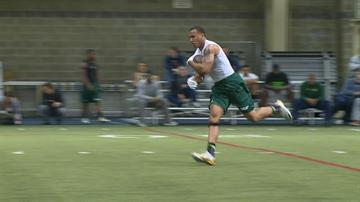 NOTRE DAME, Ind. – The 2012 NFL Draft is done, and the Fighting Irish are moving on. Four former Irish are now the newest members of three different professional teams. Two of them were drafted in the first round.

Wide receiver Michael Floyd was the 13th pick overall to the Arizona Cardinals, and he’s happy to be there.

"I was hoping I would see the area code 602 on my phone and it was a blessing that it came," said Floyd.

Floyd, who is from Minnesota and spent four years living in South Bend during school, is now ready for some warmer weather.

"I love the heat," said Floyd. "I love the weather. That’s a lot better than South Bend or Minnesota and the coaching staff is great here. I love it and I'm going to have a great time," he added.

The other first round pick went to safety Harrison Smith. The Minnesota Vikings chose him 29th overall.

Smith is familiar with the Vikings way of doing things. He played for the Minnesota coaching staff during this year’s Senior Bowl.

"I think giving me a familiarity with the coaches helps," said Smith. "I can come in here and feel like I'm part of the team right now."

Another Irish was added to the same roster, cornerback Robert Blanton will be joining Smith with Vikings.

Blanton was the 139th pick overall.

Fleming is headed to the San Francisco 49ers. He was chosen 165th overall.