Dredging to begin within the week at Silver Beach 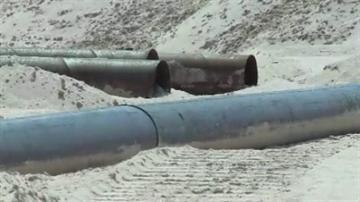 ST. JOSEPH, Mich. -- The Army Corps of Engineers says the contractor who will be dredging the St. Joseph River in St. Joseph Michigan is setting up its equipment and could begin the project within the week. The Harbormaster thinks the dredging could start sooner.

There are signs dredging work is about to start along Silver Beach.

Pipes will help move 62,000 cubic yards of material out of the outer portion of the St. Joseph Harbor.

"We have hopes that we'll get started today and we feel this process will take one to two weeks,” said Larry LaValley, St. Joseph Harbor Master.

LaValley says it hasn't been an easy route for commercial ships in this area for some time now.

"Commercially it's been a challenge every year. This year the dredging they're doing is overcome the problems that Sandy caused last year,” said LaValley.

The Army Corps of Engineers awarded the contract to king company out of Holland Michigan. Their work is expected to wrap up in early June.