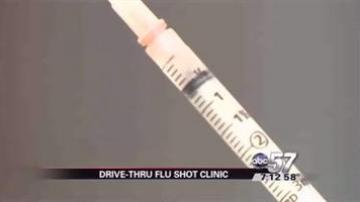 SOUTH BEND, Ind. -- It may be raining outside, but the Mishawaka folks I talked to actually managed to stay pretty dry, thanks to a drive thru flu shot clinic. They actually got to stay in their cars.

It's not the nicest day for running errands. But Jeri Niazi found one reason to get out of the house and stop by the Mishawaka fire department.

“I'm not putting out fires, but I am hopefully protecting myself against the flu virus by taking advantage of the drive through flu season,” said Jeri.

Flu season is making a comeback and the fire department has teamed up with St. Joseph County Health Department to make sure Michiana is ready.

“We know that Indiana and Pennsylvania are the first two states to report influenza cases every year", said Barbara Baker with the health department.

While coming down with the flu may sound simple, Baker says the viral illness is nothing to sneeze at.

"Almost 36,000 people can die every year from influenza," said Baker.

Drive thru flu shots clinics like the one today are making it easier than ever for people to get their shots.

Nurses administering the flu shots at the Mishawaka fire station said they gave 100 flu shots on Thursday. They said that number is a little lower than last year, so they want people to remember that flu season starts now. If you do get a flu shot, you are covered until next fall.