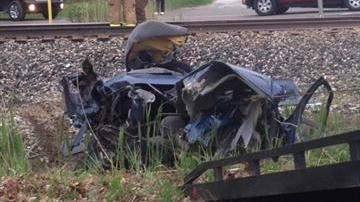 NEW BUFFALO, Mich.-- One woman was rushed to the hospital after an Amtrak Train crashed into her Ford Taurus around 7:30 p.m. on Monday.

Police said it appeared to be an accident because there are no crossbars at the crossing.

It was headed to Grand Rapids.

The accident happened at the intersection of Old M60 and Clay Street.

Officers on scene said the driver, 25-year-old Courtney Lane Koblinski, was talking and coherent when they extricated her from the vehicle.

Dan Hansen, a patrolman with the New Buffalo Police Department, said the car was in multiple pieces when he got to the scene.

Hansen said, “The train is being delayed right now, they are holding pattern until their supervisor gets on scene so they can pull the dash cam footage from it and make contact with the engineer.”

Koblinski is stable at the hospital.