Driver stopped with alligator foot sticking out of dashboard 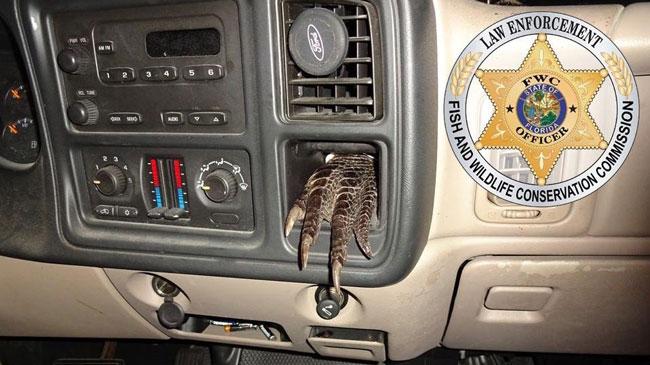 During a recent traffic stop in Loxahatchee, Florida, fish and wildlife officers found an alligator foot sticking out of the ashtray of a truck.

Officers had stopped the truck in the Corbett Wildlife Management Area -- a swampy expanse northwest of West Palm Beach -- to check the driver's day pass. Instead, they found a scene out of the horror movie "Jeepers Creepers."

Alligator parts were scattered around the cab of the truck. The driver first told officers he had hunted the gator several years ago, then confessed to killing it a few days earlier -- without a permit.

The Florida Fish and Wildlife Conservation Commission couldn't resist having a little fun with the discovery on their Facebook page and Twitter feed.

"I spy with my little eye..." they said in a post Monday, "An alligator foot in the dashboard!"

The photo also was tweeted by the popular "Florida Man" parody account.

Alligator hunting is legal in Florida only between August 15 and November 1, and only with a permit. They start at $272.

The truck driver was cited for the violation.