Driver thrown from van in semi crash on U.S. 31 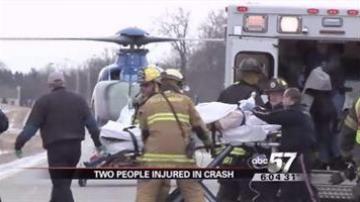 According to police, a van pulled out in front of a semi on 2C Road, just past U.S. 6. Officers at the scene said it appears that the driver did not look before pulling out into the path of the semi.

Troopers said the driver may have been under the influence of drugs or alcohol while driving.

A male driver in his 30s and a 6-month-old baby boy were in the car.

According to emergency responders, the baby was strapped in. The driver, however, was not. The driver was ejected from the van in the collision.

The baby received a bump on his head and was taken away by amublance. The driver is in critical condition and was airlifted to Memorial Hospital by MedEvac.

Crews were on the scene working to clean up the accident for about 45 minutes. The road was closed for drivers traveling south on U.S. 31, but has since been re-opened for through traffic.

One of our viewers, Kristen Keehn, shared this video with us from her Facebook wall. This is what she was able to see, passing the severe accident on U.S. 31 from the northbound lanes.

We will have more information coming up on ABC 57 News at 6 p.m.