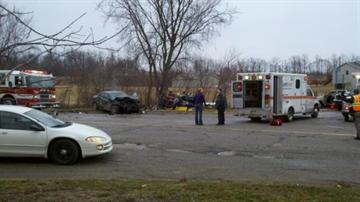 CASS COUNTY, Mich. – A two-car accident at the intersection of Dailey Road and M-60 in Cass County sent one driver to Memorial Hospital in South Bend and another had to be airlifted to Borgess Medical Center in Kalamazoo.  Both are in stable condition, they may owe their lives to witnesses who had medical training.

Cass County Sheriff’s Deputies said Amanda O’Conner failed to stop at the intersection while headed south on Dailey Road and collided with Christina Guilfoyle who was headed east on M-60.  According to witnesses, neither driver had time to hit their brakes before the crash.

“Boom!  Then the cars started smoking, it looked like one of them could catch flame,” explained Karla Dennis who witnessed the crash.  “We really didn’t think that one of them would still be alive or both.”

Dennis and a friend were driving behind O’Conner before the accident.  Both are nursing students at nearby Southwestern Michigan College (SMC) and jumped into action to tend to the drivers.  She said Amanda O’Conner was able to get out of her vehicle but soon passed out.  Christina Guilfoyle was pinned in her vehicle and it took emergency crews over an hour to get her free.

“The more you know, the more you realize that there’s so much you don’t know,” Dennis said, still shaking as crews cleaned up the scene.

Another driver who went to help also happened to be a SMC nursing student with experience dealing with trauma.  Dennis also explained that numerous other people arrived on scene offering help.

“There’s so many people too from Cass County that have so much EMT training or nursing experience,” Dennis explained.  “Right away we had people that were going by and they had heard the call or else saw it and were able to attend before the people on call were able to, that really made a difference.”

Cass County Sheriff’s Deputies said alcohol was not a factor in the accident.  Both drivers were wearing their seatbelts and both cars had airbags.