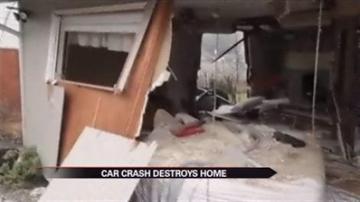 PORTLAND, Ore. -- Simply surveying the damage of one house, it looks like it was hit by a tornado; however, it was caused from a car that came barreling into the home.

The homeowner was going to bed when he heard something outside, but he didn't even have time to react.

Police said a drunk driver crashed his car through the middle of a house, going nearly 100 miles an hour.

Police arrested the driver and charged him with "driving under the influence" and criminal mischief.

The homeowner thinks his house will be a total loss.