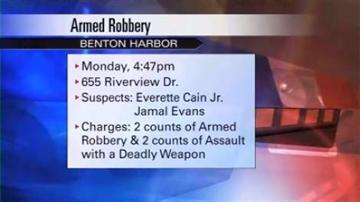 BENTON HARBOR, Mich. – Two men are locked up after an armed robbery in Benton Harbor.

It happened just before 5 p.m. Monday on Riverview Drive.  Two victims told police the duo robbed them at gunpoint before hitting one victim in the head while ordering another down on the floor.

Officers told ABC57 the suspects fled the scene after taking the money. Police eventually caught up with the suspects.

That's when they discovered the suspected handguns, were actually BB guns.