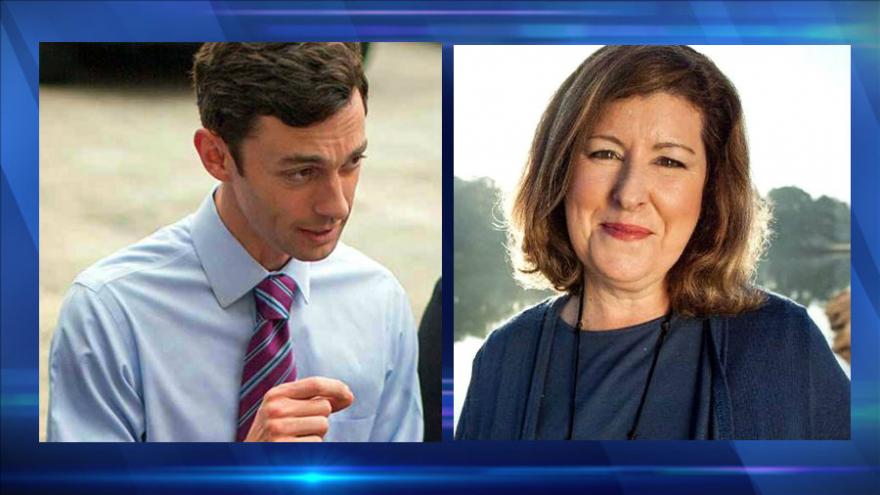 (CNN) -- More than 140,000 voters had cast their ballots by the time early voting in Georgia closed Friday -- another indication of sky-high turnout in the closely watched runoff for a House seat between Democrat Jon Ossoff and Republican Karen Handel.

And that's leaving neither side confident of victory in what is likely to be a tight race for Georgia's 6th Congressional District seat.

The pool of early voters includes more than 36,000 who did not participate in the April primary contest for the seat, which was vacated when former Rep. Tom Price became President Donald Trump's health and human services secretary, according to the Georgia secretary of state's office.

The early vote total soared past the 57,000 who voted early in the primary, where Ossoff reached 48%, just shy of the majority that would have avoided the runoff entirely. Ultimately, more than 192,000 people voted in the primary -- close to the 210,000 who participated in the 2014 midterm election in the district.

The early voting in the runoff left neither party feeling comfortable and has aides on both sides forecasting a close contest Tuesday -- even as Republicans celebrated turnout that is approaching presidential election levels in the conservative-leaning district.

The high turnout reflects the intense local and national interest a contest that -- with more than $50 million spent between the candidates, their parties and super PACs -- has become the most expensive House race ever.

Progressives who have pumped more than $23 million into Ossoff's campaign have long viewed the race as their best chance to use a special election to deliver a political blow to Trump -- and to send a message to House Republicans that aiding Trump will come at a price by capturing what for decades has been a reliably Republican seat.

Operatives in both parties acknowledge that more Republicans have voted early than Democrats -- overall, a reason for Handel's campaign to be optimistic and Ossoff's campaign to sweat.

That reality, though, is no surprise in the district, which encompasses much of Atlanta's northern suburbs. After all, Mitt Romney carried the district by 24 percentage points in 2012 -- and Price never faced a serious challenge for his seat.

It was the 2016 presidential results that gave Democrats reason for optimism. Trump only bested Hillary Clinton by 1.5 percentage points -- a result that fed into Democrats' belief that while Trump had made gains in predominantly white rural and exurban areas, the more highly educated, wealthy, diverse suburbs held more Romney-Clinton voters and presented the party with an opportunity to make gains.

Handel and the GOP super PAC Congressional Leadership Fund have worked hard to turn the race away from Trump's leadership in Washington and make it about Ossoff's youth (he is 30) and about the House Democratic leader, Nancy Pelosi. In particular, Republicans have hammered Ossoff on national security issues.

Ossoff, meanwhile, has sought to run a centrist campaign -- studiously avoiding even saying Trump's name in an effort to make himself an acceptable alternative for typically conservative voters who might be inclined to buck the GOP.

The 36,000 early voters who didn't participate in the primary at all are among the major question marks that make the early vote data hard to read for partisan advantages.

In analyzing that group, Tom Bonier, the CEO of the Democratic voter targeting firm TargetSmart, pointed out that they are less likely to be white than all other segments of voters -- and 25% of them are under the age of 35. That demographic analysis figures to benefit Ossoff.

Because of the district's status as suburban, educated and diverse, the Georgia race could be a harbinger of Democrats' ability to compete for similar Republican-held seats in places like Orange County, California, the Philadelphia suburbs and New York state in 2018.

But the district is also more conservative than some of the similar-looking targets. According to the Cook Political Report's Partisan Voter Index, there are 71 Republican-held House seats that are actually less GOP-leaning than Georgia's 6th Congressional District.