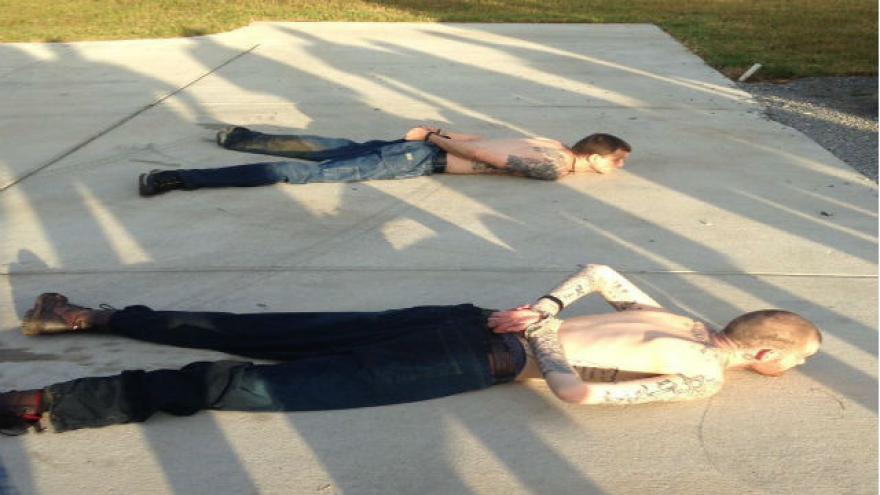 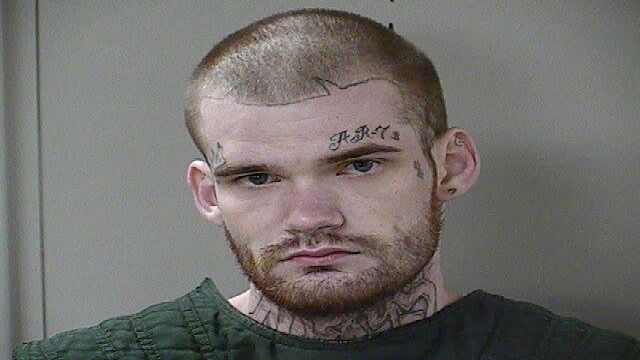 (CNN) -- Surrounded by law enforcement officers, Ricky Dubose and Donnie Rowe were handcuffed and lying face down on a residential driveway in central Tennessee.

Nearly 60 hours before, authorities launched a multistate search after they escaped from a state corrections bus in Central Georgia and allegedly killed two prison guards.

While they were on the run, the pair allegedly stole five vehicles, robbed two homes, tied up and terrorized an elderly couple; and led police on a chase where speeds reached 100 mph, officials said.

The two men got onto a correctional bus as prisoners but became fugitives shortly before sunrise. 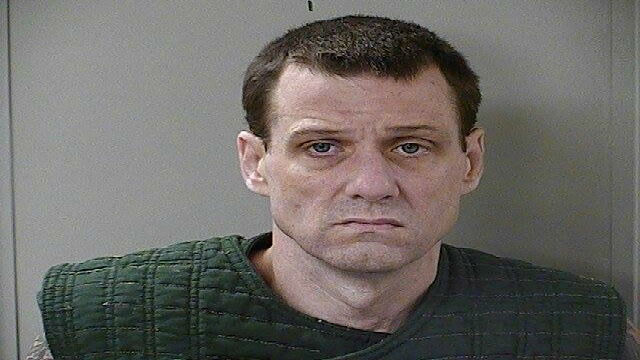 Rowe, 43, and Dubose, 24, along with 31 other prisoners were headed to the Georgia Diagnostic and Classification Prison, some 45 miles west of Eatonton, which is about half way between Atlanta and Augusta.

The pair had been cellmates once and both were serving prison sentences for separate armed robbery and assault convictions at Baldwin State Prison near Milledgeville.

Rowe was serving up to life in prison and Dubose up to 20 years in prison, officials said.

The minutes that preceded their escape are still under investigation but police say the two somehow got out of what should have been a locked, gated rear section of the bus.

They entered the driver's compartment, overpowered and then disarmed Officers Christopher Monica and Curtis Billue while the bus was on State Route 16 near Eatonton, some 70 miles southeast of Atlanta, police said.

"I saw two brutally murdered corrections officers, that's what I saw," said Putnam County Sheriff Howard Sills recalling what he saw on the bus. "I have their blood on my shoes."

They left the horrific scene, carjacked a driver who pulled up behind the bus and fled in the man's Honda Civic.

As word of the inmates' escape spread, photos of the two men emerged on social media. Rowe and Dubose slowly made their way north.

They ditched their uniforms for stolen clothes when they ransacked a house about 30 miles from where they left the bus, Sills said.

Following their tracks and footprints, authorities discovered that the inmates took a 2008 white Ford F-250 pickup from a rural business in Madison, Georgia, sometime between Tuesday evening and Wednesday morning.

"I'm sure (the keys) were left" in the truck, Sills said. "This is a rock quarry-type place."

Dubose and Rowe quietly crossed state lines between Wednesday and Thursday before they ditched the stolen truck in Moore County, Tennessee.

There the two apparently stole a car, which they covered with grass and branches when they ditched it along a state highway in Bedford County, authorities said.

Inmates 'tied up' an elderly couple

Without a car, Rowe and Dubose walked up a hill and reached a home in Shelbyville, about 30 miles from the Georgia -Tennessee border.

Bedford County Sheriff Austin Swing said the escaped inmates forced their way into the home and held an elderly couple hostage at gunpoint for about three hours.

"They wrestled with the man and got control of him and threatened both of their lives," Swing said.

"[They] tied the man up with a belt and put socks on his hands where he couldn't use his fingers," he added.

In the span of three hours, the inmates ate a "beef stew like" soup and took shoes, clothing as well as jewelry from the house, Swing said.

Shortly after 5 p.m. (local time), the pair left in the couple's Jeep Cherokee because the engine of another vehicle didn't start, Swing said.

At that point, a deputy tried to pull them over without knowing it was the escaped inmates, Rutherford County Sheriff Mike Fitzhugh said.

Several SUVs were hit when the escapees drove away, opening fire on deputies as they fled. No one was injured, officials said.

Dubose and Rowe crashed the stolen SUV and ran into some woods. Some police cars followed them while others stayed back blocking the highway.

The bravery of a homeowner put an end to the three-day long manhunt, Fitzhugh said.

The inmates had run through the woods to a home on Pruitt Road, near the rural community of Christiana.

Authorities had said the homeowner saw the inmates trying to steal his vehicle and called his neighbor. Both men, armed with guns, confronted the fugitives and held them at gunpoint, they said.

But Patrick Hale told reporters on Friday that he never drew his weapon.

He had been at his home on Pruitt road with his daughter when two friends called warning him about the fugitives.

Hale loaded his weapons, called 911 and "prayed like I never prayed before," he said, as the two men crossed a barbed wired fence that's about 300 yards from his back door.

The 35-year-old father took his daughter, got into his car and began backing it up from their driveway when Robe and Dubose took their shirts off and started waving them.

"My vehicle looks very similar to a police cruiser," Hale said. "For some reason they started to surrender and lay down on their stomachs in my concrete driveway."

Hale said he was ready to do "whatever" he could to protect his family.

"I had a weapon on me but I never had to draw the weapon," he added.

Having lost their weapons in the crash, Dubose and Rowe surrendered, authorities said.

"I can't say enough about the bravery of the homeowner, and what they took on, the wherewithal to call us and give us the information so we could get over there and apprehend these two subjects," Fitzhugh said.

As of Friday, authorities had not discussed any charges against the fugitives. Prior to their arrest, they had said that at least one of them shot and killed the officers.

The men waved their rights to an extradition hearing and it's a matter of time before they return to Georgia. But authorities will still need to sort out the future of a reward that rose from $60,000 to $130,000 as the days passed.

"Maybe a lot of people are getting a reward out of this," Tennessee Bureau of Investigation Director Mark Gwyn told reporters.