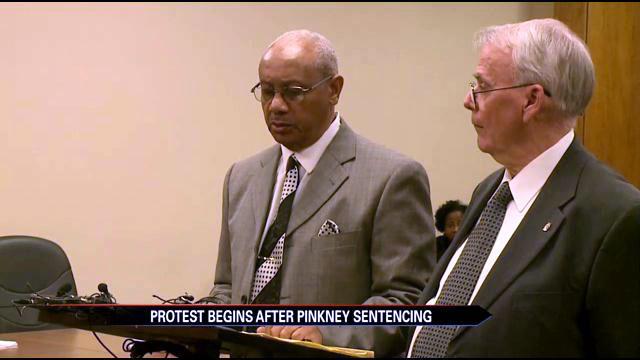 The judge sentenced him to between 30 and 120 months in prison.

Pinkney's trial began October 27 and the jury returned a verdict on November 3.

Pinkney was found guilty of the five counts of forgery for changing dates on petitions to recall Benton Harbor Mayor James Hightower.

Pinkney was found not guilty of six counts of false certification of recall petitions. He was accused of allowing people to sign the petitions more than once.

During his trial, Pinkney and the three other witnesses testified a woman named Vanita Campbell made all the illegal changes to the petition.
After the sentencing, around 75 people gathered and held a peaceful protest.

"We will continue to march for justice! May justice prevail in the courts. It's going to take a lot of us. And people need to stop looking from the window of they homes and come out and fight in the streets," said activist Marcina Cole.

Cole came from Detroit to protest because she believes Reverend Pinkney is innocent.

She's one of many who says Pinkney didn't receive a fair trial.

"All white juries should never happen in a black man's trial. We are to be judged by our peers not by some hand picked racist idiots that this judicial system decides to put our lives in their hands. That's not fair," said Pati Heinz, a protestor who attended the trial.

Heinz lives in Southwest Michigan. She says officials in Berrien County have destroyed the public's trust.

"The county commissioners have been stealing money, hundreds of thousands of dollars and they're not going to jail! This man tries to speak the truth and they are railroading him!" said Heinz.
The courtroom was packed with concerned citizens and dozens of people had to wait in the hall.

Pinkney continued to proclaim his innocence on the stand.

"This whole case, there was not a shred of solid evidence! He was convicted on circumstantial evidence which was very flimsy! I sat through the whole trial, I seen it first hand, this injustice has got to stop!" said Heinz.

Benton Harbor Commissioner Marcus Muhammad says this harsh sentencing is only furthering the disconnect between white and black people in the community and the country.

"Officer Darren Wilson was allowed to go free. And we saw the suffocation and the choking of Eric Gardner and his murderers were allowed to go free.  So for Reverend Pinkney to be convicted and sentenced to prison on this day only reflects that the justice system is in shambles!" said Muhammad.

Judge Shrock says he took into account the habitual offender statue in this sentencing because he says this is Pinkney's 12th felony conviction.

The judge also explained in court that Mayor James Hightower suffered psychological distress following the illegal recall and that played a role in his sentencing decision.

They held signs, prayed and chanted because they believe Pinkney was wrongfully convicted.