Edwardsburg small businesses filling a truck to send to Gatlinburg 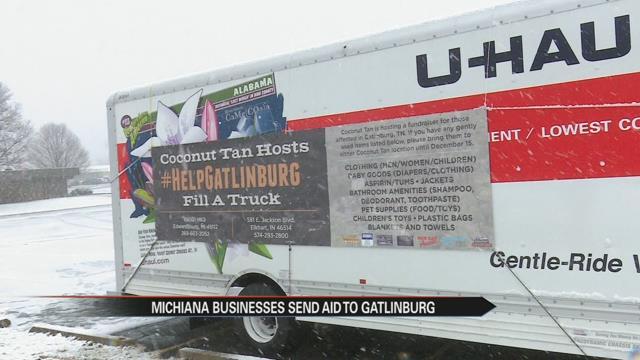 Hundreds of people are left with nothing after fires raged through Tennessee. Now, Michiana residents want to help them get back on their feet—by filling a truck.

A group of businesses in Edwardsburg are filling a truck to send to Gatlinburg—with trash bags of hope. At least, that’s what Deven Lambart calls them.

“Everything that comes in as a donation, we’re going to put in the truck and we’re going to send it down to those people to help them out,” said Lambart, owner of Southwest Vision Center.

It all started with Shell Kalka, who owns Coconut Tan in Edwardsburg, MI.

“Shell and her family, they were affected by a house fire back in 2012, and they did. They lost everything,” said Coconut Tan Sales Associate Sierra Lawson.

“That’s why it’s so close to home, and she can relate probably better than someone like me who’s never had to go through it,” said Jerry Droppo, who owns SATLINK.

She united her neighboring businesses, like Southwest Vision Center, SATLINK, and Hubcap Annie in Mishawaka, who donated the truck.

They just started collecting supplies on Friday, and they’ve already filled about half of a U-Haul.

Their goal is to fill and drive the truck to Gatlinburg three times by December 15.

That’s why these small business owners are doing what they can.

“If other communities around the area come together to try to help other communities. That’s kind of what being a small business is about. Doing the right thing for people that need it,” said Lambart.

“And they lost their homes and stuff, so I asked my mom if we could go to the Dollar Store and buy all this stuff that I got,” said Chance Walters, Bruce’s son.

“For people to rally around and to give them hope especially at Christmas time, it really gives them the ability to smile once or twice when that truck rolls in,” said Lambart.

If you want to donate items, you can drop them off at any of the following locations: