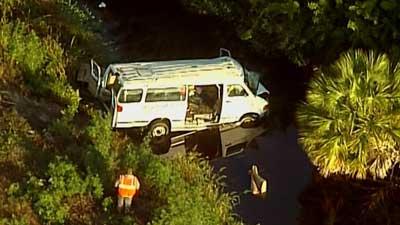 That's about all police in Glades County, Florida, had to work with early Monday, hours after a van with 18 people inside ran a stop sign, crossed a four-lane highway and plunged into a shallow water-filled ditch. Eight people died. Ten others, including a 4-year-old child, were injured, according to police.

"Our hearts go out to the families of the victims," Bueno said. "It breaks your heart to see something like this happen."

Some relatives of the crash victims, all of whom were from the Independent Haitian Assembly of God in Fort Pierce, gathered at the rural intersection Monday morning. Others went to the church.

"We've lost a lot of family members, church family," Phillipe Dorce, who said he lost his father, told WPBF. "All we can do is pray (to) God to help us out. Pray for us. It's very sad for us."

Linda Dolce told the news site TCPalm.com that her grandmother died in the crash. She'd arrived from Haiti six years ago.

"She loved singing and helping people," TCPalm.com quoted her as saying. "She was exciting; she was the best lady to us."

Laura Lochard told the site that her uncle died in the crash, leaving behind four children, the youngest of which is 16, whom he brought to the United States from Haiti. He was like a father to her, too, she said.

"It's never easy to lose a person, but I have to be strong," she told the site. "I'll never forget his smile."

A pastor at the church, Sereste Doresma told CNN that parishioners had attended a revival in Fort Myers and had left Sunday afternoon.

"This is a very difficult day for us today," he said.

The van apparently was traveling east on State Road 78 when it ran a stop sign at U.S. Highway 27 early Monday, authorities said. It then crossed all four lanes of U.S. 27 and stopped in a ditch that was partially filled with water.

No one saw the accident on the rural stretch of roadway that's frequented mostly by commercial traffic, Bueno said. One of the passengers flagged down a passing vehicle, whose driver called police, the trooper said.

Of the passengers, all were adults except for the 4-year-old, who was in stable condition at a hospital, Bueno said. Two of the adult passengers were in critical condition, he said.

Passengers were being treated at four hospitals.
Share this article: