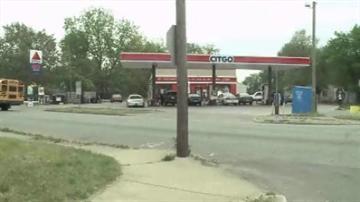 “Our officers were out there about 415 in the morning they noticed that the store had been closed for quite a while lights were off etc. and there were still people in the parking lot the parking lot prominently have posted no trespassing and at that point in time they stopped the people who were in the parking lot and arrested them for trespassing,” said Captain Phil Trent of the South Bend Police Department.

Police say it is common for the station to be crowded after school and after the bars shut down.

"A lot of times, especially when kids get out of school, especially when bars close for the evening, we will get collections of people that could stop at any one of half a dozen to a dozen destinations or convenience stores that are open during the night,” said Trent.

Neighbors know this is one of them.

“It's so many people down there,” said Julia Phillips.

Phillips has lived in the area for more than 50 years. She says at 5 p.m., she’s inside, not outside on the porch.

"I'm even afraid to walk down the sidewalk now,” said Phillips.

Her neighbors are so scared about the problems at the corner gas station, they don’t want their faces shown on camera.

"Come on a weekend night and you'll see everything, there has been shootings, I don't feel safe,” said one neighbor.

The owners were not available to do an interview or talk about the issue but it's clear they do not want trespassers here after hours.

A white sign hangs in the window warning trespassers are not allowed to loiter.

"We are working with business owners. These business owners are doing something proactive by saying we simply do not want people here after hours,” said Trent.