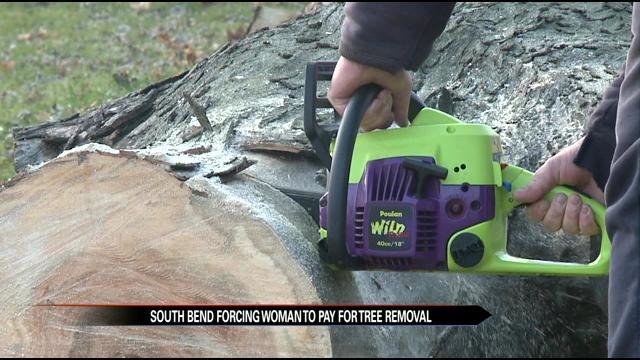 The city of South Bend is giving an elderly woman thirty days to remove a pair of trees on her property that they've deemed dangerous.

King has been living in her home in the Keller Park neighborhood for over 50 years.

"We got married in 1961 and we just drove around. We picked our house and that was it," said King.

Letters from the city's forester estimate it would cost $1,000 to remove both trees.

"I mean I thought I was going to die right then and there,” said King. "I am so disappointed with the city. It's ridiculous, absolutely ridiculous."

King's Keller Park neighbors think so too, that's why a group of them took it upon themselves to take down one of her trees.

"They're good people and they're always looking to help their neighbors where they can," said South Bend Common Councilman Tim Scott. "What we're doing is trying to find alternatives and trying to find ways to help citizens out, especially those on fixed income. But, when it really comes down to it, trees are part of the property, trees are part of your value to your home."

King has arranged to have the second tree taken out on Monday. The crew coming out to do the job is giving her a senior discount.