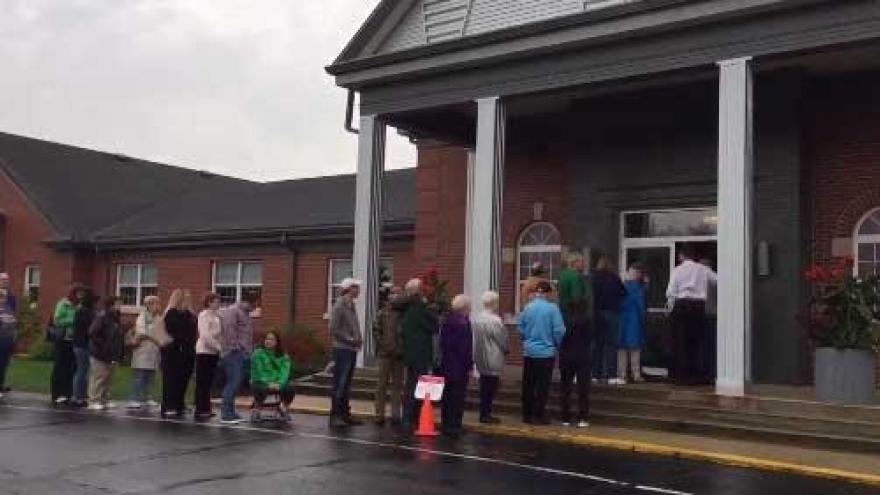 The polls close in Indiana at 6 p.m. and in Michigan at 8 p.m. ABC57 has reporters throughout Michiana with the latest updates on polling locations, any issues voters have experienced and interviews with candidates who are voting today.

9:55 p.m.
Eric Holcomb has won Indiana's Gubernatorial race. John Gregg has made a concession speech. He said he is not sure he will run again.

With 97-percent of precincts reporting, a majority of voters are in favor of the two Mishawaka Schools referendums.

8:54 p.m.
CNN projects Todd Young will win the US Senate seat in Indiana.

As of now, Clinton has 68 electoral votes, Trump has 57. Florida too close to call. [Electoral vote map]

8 p.m.
Polls throughout most of the state of Michigan have closed, however, part of the state is in the Central time zone. Polls there will close at 8 CST.

6 p.m.
Polls have closed in Indiana. Anyone in line when the polls closed at 6 p.m. will still be allowed to vote.

Early voting totals are in for Indiana. Click here for a county by county breakdown

1:10 p.m.
At Granger Community Church, 1500 people voted this morning. The big crowds caused long lines and the average wait time was an hour and a half.

1:01 p.m.
Fire Station 5 in South Bend near Rum Village is experiencing a problem with one of the machines. ABC57's Haley Fixler says it has only affected about 10-15 voters. The precinct inspector says they called a tech to fix the problem at 6:30 a.m. but no one has been out to fix it yet.

11:50 a.m.
Mike and Karen Pence cast their ballots in Indianapolis.

10:22 a.m.
One machine at the O'Brien Center in South Bend has broken several times this morning.

7:30 a.m.
Jackie Walorski, running for Indiana's 2nd Congressional District, voted at Jimtown High School around 7:30 a.m. The lines were out the door and around the school this morning.